No. 18 SMU path to AAC title game starts with game at Temple 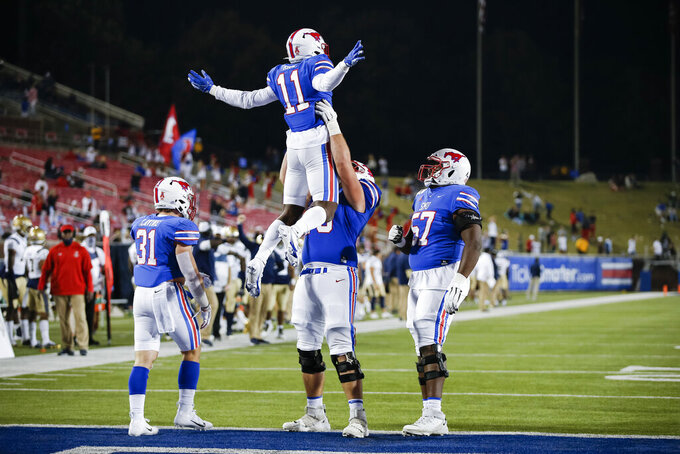 SMU has a clear path to the American Athletic Conference championship game if it keeps winning. The Mustangs bounced back from a loss to undefeated No. 6 Cincinnati with a win over Navy. Their next two games after Temple are at Tulsa and at home against Houston, the only other teams with fewer than two league losses. Temple is trying to avoid three consecutive losses in the same season for the first time since 2014.

Temple head coach Rod Carey vs. SMU defensive coordinator Kevin Kane. Before becoming DC at SMU in 2018, Kane had that role for two seasons at Northern Illinois when Carey was head coach of the Huskies before going to the Owls in 2019. Current Temple DC Brett Diersen was SMU's defensive line coach under Kane in 2018.

Temple: Junior receiver Jadan Blue is second in the league with 7.8 catches per game. He has 31 receptions for 266 yards and five touchdowns.

SMU: Senior linebackers Delano Robinson and Richard McBryde are the team's top two tacklers, and both have three sacks. Robinson has 53 total tackles (41 solo) and McBryde had 38 (33 solo) with seven tackles for loss.

SMU has scored at least 50 points three times already this season. The only other time the Mustangs had that many 50-point games was 1928. ... Temple forced three turnovers last week against Tulane, but was outgained 504-222 in a 38-3 loss. ... The Mustangs have 13 takeaways (six interceptions, seven fumble recoveries) to rank third nationally. ... The last four times SMU and Temple have played, the winning team has scored at least 45 points. They have combined to average nearly 85 total points in each of those games. ... Before that, the first two games in the series — in 1942 and 1946 — ended in ties.