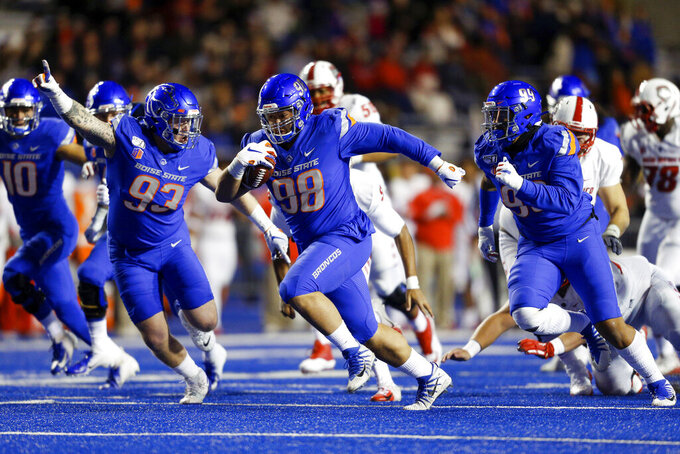 The Mountain West title will again be decided on Boise’s blue turf and with it any chance the Broncos have of sneaking into the New Year’s Six bowl games and landing in the Cotton Bowl. The Broncos need a convincing victory over Hawaii, plus a Cincinnati win over Memphis in the American title game, to likely have a chance of returning to the New Year’s Six for the first time since 2014. The Warriors are in the conference title game for the first time after finishing in a tie for the West Division title and looking for their first win over the Broncos since 2007, having dropped seven straight.

Boise State’s offense vs. Hawaii’s defense. Defense? From Hawaii? While it hasn’t been a strong suit for the Warriors in recent years, their defense is the reason they’re in the championship game. Hawaii held UNLV to seven points, then most impressively shut down San Diego State’s run game in a 14-11 win that put the Warriors in the championship game. Boise State has turned the offense over to Jaylen Henderson the past three games and it’s been the right move. Henderson has eight touchdowns and one interception, and the Broncos are averaging 446 yards in those three victories.

Hawaii: QB Cole McDonald finished with pretty good numbers in the first meeting against Boise State but they were overshadowed by the Warriors trailing 31-7 at halftime. The Warriors had three first-half fumbles, three punts and turned the ball over on downs once.

Boise State: WR John Hightower had his best game of the season, and second-best of his career, in the first meeting with the Warriors. Hightower had seven catches for 141 yards and two touchdowns in the victory. Hightower has four games this season with more than 100 yards receiving.