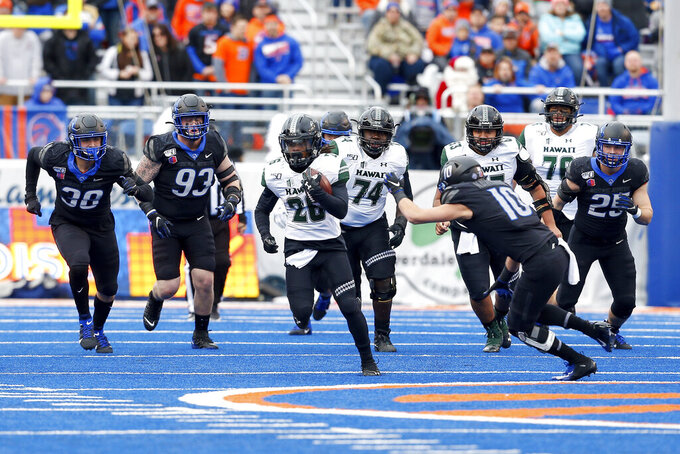 Hawaii running back Miles Reed, center, breaks away from the Boise State defense on a 25 yard run during the first half of an NCAA college football game for the Mountain West Championship Saturday, Dec. 7, 2019, in Boise, Idaho. (AP Photo/Steve Conner) 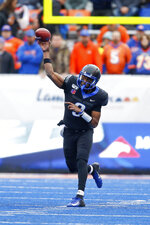 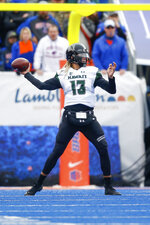 BOISE, Idaho (AP) — Jaylon Henderson started the season third string on the quarterback depth chart. He finished the year by hoisting the Mountain West championship trophy after being selected the game MVP.

The senior threw for 212 yards and two touchdowns and ran for another score in No. 19 Boise State's 31-10 victory over Hawaii in the conference championship game Saturday.

Henderson’s play-making ability sparked a lethargic offense late in the first half, though he almost didn’t get a chance to make it happen.

Hank Bachmeier, the Broncos’ starting quarterback who hadn’t played since suffering an undisclosed injury against San Jose State on Nov. 2nd, was warming up on the sideline to possibly enter the game late in the half.

But that all changed in 53 seconds when Henderson threw two touchdown strikes of 36 yards each to Khalil Shakir and John Hightower.

“We have a lot of guys that are in that locker room that are just like (Henderson),” Boise State coach Bryan Harsin said. “We say all the time is hard work does not go unnoticed. There’s a lot of other good players that played really well tonight, but this hard work and staying focused and putting in what you're asked in your role to go out there and star in it, these guys have done that.”

Henderson harkened back to Nick Saban’s famous “rat poison” quote when asked about his mindset of entering his senior season third on the depth chart behind a freshman and sophomore.

“When people would ask about my feelings of not playing, all that is pretty much rat poison to me,” said Henderson, who transferred to Boise State after spending a year at Texas-San Antonio and another at a junior college. “At the end of the day, I’m a type of guy that no matter what the team does, I just want to go out there and get the win.”

After rolling up 518 yards of offense in the first game, the Broncos also leaned on their defense more in the rematch.

Nose tackle Sonatane Lui, who entered the program as a walk-on, anchored a Boise State defense that forced two turnovers and had two fourth-down stops inside its own 5. The senior also earned defensive MVP honors with two sacks, two tackles for loss, and one forced fumble.

After the game, Lui held up a sign that read, “We want Bama”.

“Anyone we're going to play in the postseason would be a great match-up,” Lui said. “We always go to prove ourselves, and whether it's Bama or whoever else is in front of us, I think we’ll definitely show out and go do what we’re supposed to do.”

Hawaii (9-5) was making its first appearance in the title game. It enjoyed some success through the air with Cole McDonald passing for 241 yards, but couldn't overcome early problems in the red zone.

POINTS OFF THE BOARD

The old adage is that you never take points off the board, but Hawaii bucked that in the second quarter—and paid a steep price.

Early in the second quarter with the game still tied at 3, coach Nick Rolovich elected to take a made 21-yard field goal by Ryan Meskell off the board after an offside penalty moved the ball to the 1. However, Boise State stuffed McDonald on a sneak up the middle. And Hawaii didn’t score again until the fourth quarter.

“I didn’t feel like field goals were going to win the game,” Rolovich said in defense of his decision. “We needed to be aggressive right there.”

Despite the fact that Boise State entered the game behind Memphis in the CFP rankings and the Tigers won 29-24 against Cincinnati, Harsin made his case that the Broncos belong in a New Year’s Six.

“Look at the bowl games that we played in,” Harsin said. “Boise State has showed up. I would say for those teams, we’ve played some exciting football as well, and we’ve been very competitive, and we’ve won most of those games. The big ones, the New Year’s Six—we’ve won all of them.

“I think this conference, this team, and what we were able to accomplish this season under the circumstances that we had, it’s hard to find another team in the country that's able to say that. You want an exciting football team? The Broncos need to be in it. It's really that simple.”

Hawaii: The Rainbow Warriors were denied their first 10-win season since 2010 when they finished 10-4. However, Hawaii has continued to improve under fourth-year coach Nick Rolovich after suffering through five consecutive losing seasons before his arrival. With McDonald returning next season along with the team’s top two rushers, Hawaii should be in the mix for the Mountain West title in 2020.

Boise State: The Broncos might be left to wonder what could’ve been if they don’t get the nod from the playoff committee for the Group of Five’s slot for the New Year’s Six bowl game. The lone blemish on Boise State’s record came against burgeoning rival BYU when sophomore Chase Cord made his first start in place of the injured Bachmeier and the Broncos fell short, 28-25.

Bowl games to be determined.