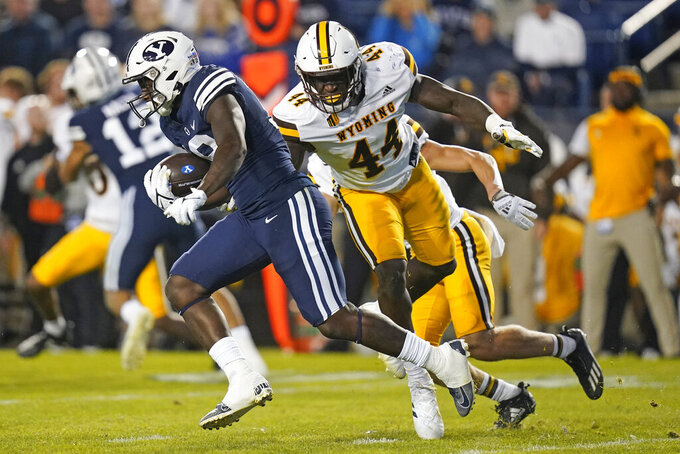 Line: BYU by 24.5, according to FanDuel Sportsbook.

BYU meets Utah State in the annual Battle for the Old Wagon Wheel for the last time in the immediate future. The rivalry series will go on hiatus after this season with the Cougars joining the Big 12 next year. The Aggies are mired in a three-game losing streak since beating UConn in their season opener. BYU is facing a Mountain West Conference team for a second consecutive week after beating Wyoming 38-24. Utah State has lost two straight in the series but has won two of their last three games played in Provo.

Jaren Hall vs. the Utah State defense. The Aggies struggled to stop Alabama QB Bryce Young earlier this season and will have their hands full facing another dynamic quarterback. Hall has passed for at least 250 yards in eight straight games and is coming off his best performance of the season after throwing for 337 yards and four touchdowns against Wyoming.

Utah State: Logan Bonner has struggled to get on track this season. Bonner threw for a season-high 313 yards in the Aggies’ 34-24 loss to UNLV, but he also tossed five interceptions against the Rebels. Through four games, Bonner has completed just 56.4% of his pass attempts and has thrown eight interceptions while completing only six touchdown passes.

BYU: Miles Davis moved up to a co-starter with Chris Brooks and Lopini Katoa on the depth chart after he ran for a career-high 131 yards on 13 carries against Wyoming. Davis may be poised for another standout performance when he faces Utah State. The Aggies rank 11th among Mountain West teams in run defense, giving up 206.3 rushing yards per game.

BYU and Utah State have played for possession of the Old Wagon Wheel trophy since 1948. … Ike Larsen is the first Utah State player since 2017 to block two punts in a season. Larsen blocked punts against UNLV and Alabama. … BYU is one of 11 FBS teams this season to have three plays of at least 60 yards or longer — a 68-yard pass, a 70-yard run, and a 75-yard run. … Keanu Hill had 160 receiving yards against Wyoming after totaling 123 receiving yards in his first three games … Utah State is 1-13 all-time against ranked BYU teams, earning its lone win in 2014.