No. 19 BYU looking to rebound in Big 12 preview at Baylor 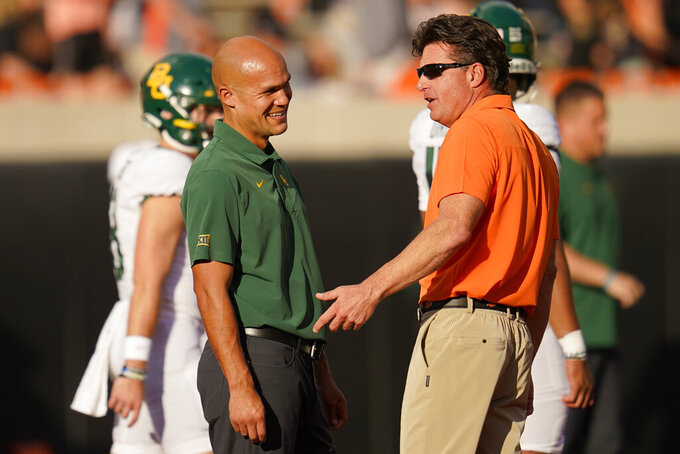 Line: Baylor by 6 1/2, according to FanDuel Sportsbook.

A Big 12 preview for BYU, which will end more than a decade playing as a football independent when it joins the league in two seasons. This non-conference game has been scheduled for more than five years. The Cougars accepted an invitation last month to join the Big 12. They are coming off their first loss, 26-17 to Boise State after four turnovers. Baylor bounced back from its only loss with a 45-20 win last week over West Virginia.

BYU: Sophomore RB Tyler Allgeier ranks 17th nationally with 106.2 yards rushing per game, including 218 yards against Utah State. He has eight rushing TDs, with scores in each of the last four games.

Baylor: Fourth-year junior QB Gerry Bohanon, in his first year as the starter, has thrown for 1,337 yards and is one of only three FBS players with at last 10 passing TDs and at least six rushing. He has a rushing TD in five consecutive games. Baylor and Ole Miss are the only two FBS teams which haven't thrown an interception.

BYU lost in its only previous trip to Waco in the 1983 season opener. The Cougars then won their next 25 games, including one at home over Baylor during their undefeated 1984 national championship season. ... Baylor, Georgia and Michigan are the only Power Five teams that rank top-25 nationally in both scoring offense and scoring defense. ... The Cougars are 3-0 against P5 teams. They opened the season with three wins in a row over Pac-12 teams.