No. 19 Hawkeyes look to crank up run game again vs Huskers 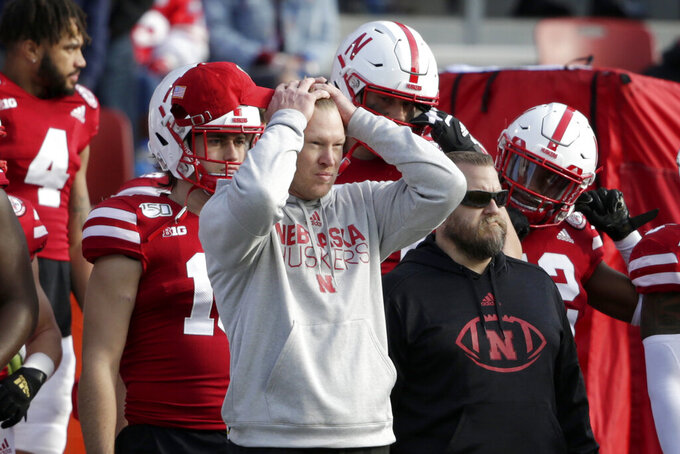 LINCOLN, Neb. (AP) — Iowa’s run of success against Nebraska has been predicated on its ground game. Recently, it hasn’t been working so well.

The 19th-ranked Hawkeyes have rolled up more than 260 yards rushing in each of the last three meetings with Nebraska and have had a running back go for more than 100 four straight years, all wins.

Iowa (8-3, 5-3 Big Ten) comes to Lincoln on Friday having averaged just 2.6 yards per carry over its last seven games and just one individual 100-yard rusher in 11 games. The Hawks ran for 79 on 32 carries against Illinois last week.

“We didn't run the ball very effectively at all Saturday,” coach Kirk Ferentz said, “and we're going to have to do at least a somewhat better job on this Friday to have any chance in this football game.”

Nebraska (5-6, 3-5) has allowed 223 rushing yards per game against Big Ten opponents. Ohio State, Minnesota and Wisconsin all ran for more than 300 against the Cornhuskers.

The Hawks should see a motivated opponent on what is forecast to be a rainy afternoon with temperatures in the upper 30s. The Huskers need a win to become bowl eligible for the first time since 2016.

“We know what’s at stake,” Huskers linebacker Collin Miller said. “Senior day, bowl game eligibility, rival game. So we just want to go out there and play how we play and end up with a victory.”

“All I know is it took us every play in the game to win the game,” Ferentz said. “It was really tough, hard-fought, and my guess is that that's what it’s going to be. So that's where our focus is. I expect them to be fully ready. It's their senior day, too, and they'll have 89,000 people there screaming, so I think we know what we're walking into.”

Other than Miller saying he doesn’t think the Hawks respect Nebraska and that the teams have never liked each other much, there’s been no trash talk between the border rivals. Ferentz said he teaches his players to respect all opponents and that he doesn’t know where Miller got the idea about a lack of respect. The coach said he considers every Big Ten West opponent a rival.

Iowa prides itself on playing a physical brand of football, and a former Nebraska defensive coordinator paid the Hawkeyes the ultimate compliment after the 2016 loss when he said the Hawkeyes’ practices must have been a “bloodbath.” Now comes word Iowa had no contact in practices this week. Ferentz said he typically cuts back on hitting this time of year to keep the team fresh.

“If you leave the game on the practice field,” he said, “that's just a bad thing.”

Iowa’s defense is going to need to keep track of Luke McCaffrey. The freshman lined up at receiver against Maryland last week and threw 28 yards to JD Spielman on a reverse pass and caught a 12-yard pass. He took mop-up snaps and completed three more passes and ran 10 times for 83 yards.

Nebraska coach Scott Frost said McCaffrey’s future is at quarterback and that he played receiver only because the Huskers are thin at that spot.

NFL scouts love Iowa defensive end A.J. Epenesa, and Frost can see why when he watches the man in black and gold torment quarterbacks.

“He just looks like a Sunday guy when you look at him on tape. That just will be a Steelers uniform,” Frost said. “That is how he is built. That is how he plays.”

Nebraska will honor 22 seniors before the game. The group has never beaten Iowa and has gone 22-26 over four seasons, with redshirted players having gone 28-33 over five. A half-dozen of the seniors were recruited by the staff of Bo Pelini, who was fired in December 2014, and played for Mike Riley and Frost.

“These seniors have been through a lot by now,” Frost said. “It has certainly experienced some ups and downs. The guys that are still here out of this senior class have fought through a lot and we appreciate so much the effort they have given.”