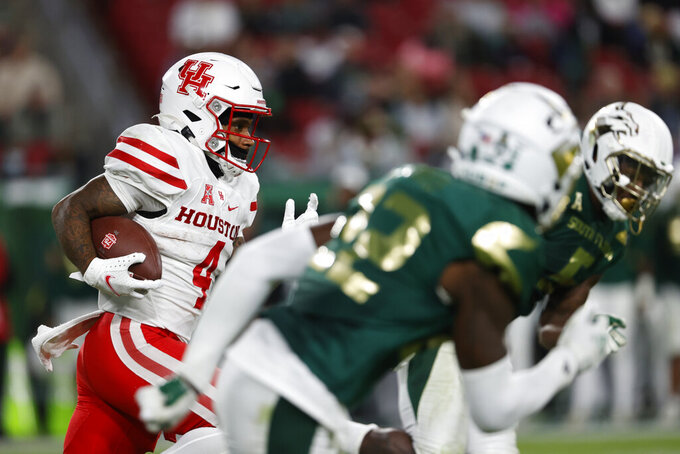 Houston Cougars running back Ta'Zhawn Henry carries for a touchdown against South Florida during the second half of an NCAA college football game Saturday, Nov. 6, 2021, in Tampa, Fla. (AP Photo/Scott Audette)

EAST HARTFORD, Conn. (AP) — No. 19 Houston heads to UConn on Saturday trying to avoid the overconfidence that might come with ending an already successful regular season against the one-win Huskies.

Dana Holgorsen's Cougars (10-1, 8-0 American, No. 24 CFP) already have gone undefeated in their conference and clinched a spot in the Dec. 4 American Athletic Conference title game against No. 4 Cincinnati.

But Holgorsen said his team still has a reason to be focused on the hapless Huskies (1-10).

Houston will come into Rentschler Field on a 10-game winning streak and with the chance to become just the fifth team in program history to win 11 games in a season.

UConn's win came against Yale on Oct. 16, a victory that ended an 11-game losing streak. The Huskies have not beat an FBS opponent since winning at UMass in October 2019.

The Huskies parted ways with coach Randy Edsall just two games into what is their first season as an independent after leaving the American. They will be playing their last game under interim head coach Lou Spanos before former UCLA and NFL coach Jim Mora takes over.

Mora, who has been serving as an assistant coach since his hiring was announced earlier this month, spent his holiday week on the recruiting trail, taking in high school football games across Connecticut.

Holgorsen said linebacker Donavan Mutin, who had to be carried from the field during Houston’s win over Memphis, is doing well.

But at his weekly news conference, Holgorsen would not say whether Mutin would be able to play, either against UConn or in the conference title game against Cincinnati.

“First and foremost his health and safety are the No. 1 thing that we’re concerned about,” Holgorsen said. “And he’s good.”

Holgorsen said Mutin’s playing status would be determined by the team’s medical staff.

UConn is expected to lose several players as it switches coaching staffs, a process that already has begun.

Defensive back Jeremy Lucien was left off the two-deep this week, just before he announced that he is entering the NCAA transfer portal. The 6-foot-2 junior had 29 tackles and two interceptions this season.

“I gave you everything I had both on the field and in the classroom,” Lucien said in a Twitter post to UConn fans. “I know the wins didn’t come but hopefully your fortunes will change going forward."

The Cougars and the Huskies met three other times before UConn left the American. The last meeting was at Rentschler Field in 2019, when Logan Holgorsen, Houston coach Dana Holgorsen's son, started at quarterback and helped the Cougars to a 24-17 win. The younger Holgorsen is now Houston's equipment manager.