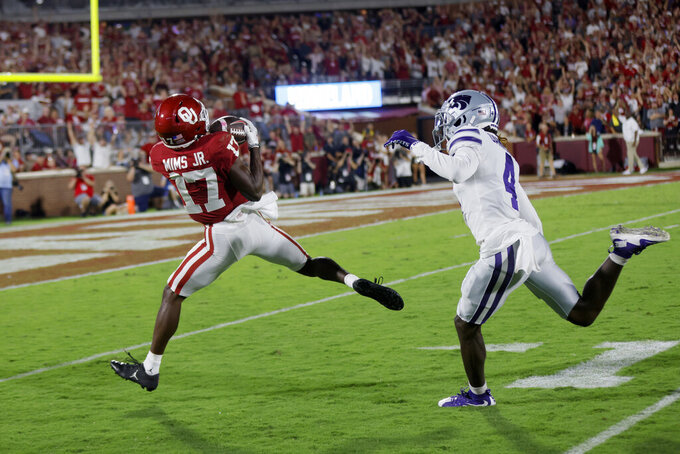 NORMAN, Okla. (AP) — Kansas is in a much different situation than usual heading into Saturday’s game at Oklahoma.

The Jayhawks are having a special year, opening the season with five straight wins before last Saturday’s loss to TCU. With a victory against the Sooners, the 19th-ranked Jayhawks would be bowl eligible for the first time since 2008.

Coach Lance Leipold is trying to make sure his Jayhawks don’t focus on where they might end up.

“If you get caught up in any of that, you’ll never get to where you want to be,” he said. “Worry about what you can control. If you’re worried about that other stuff, those will be nice, but you’ve got to earn it. And the best way to earn it is get after it today and get ready for the next one.”

Oklahoma is favored, despite losing three straight. And Oklahoma has won 17 straight against the Jayhawks.

Leipold remembers the tough times last year in his first season, and he said Oklahoma coach Brent Venables is going through some of the same things.

“Maybe it hasn’t gone their way of late, but as we know from last year as well, the first year, there’s going to be times where you’re going to have some bumps,” he said. “That’s too good of a staff, too good of a program and everything, and a roster — it’s going to be a big test for us down there.”

The Jayhawks will likely be without starting quarterback Jalon Daniels because of an injury. Jason Bean will likely step in. He started 10 games for Kansas last year, and he threw four touchdown passes in relief against TCU.

Oklahoma has quarterback issues, too. Dillon Gabriel was in concussion protocol and missed last week’s blowout loss to Texas. He has been one of the best players in the Big 12 this season, having passed for 1,215 yards and 11 touchdowns without an interception this season. He’s also rushed for 126 yards and two scores.

Without him, the Sooners were held to 195 total yards in the 49-0 loss to Texas. Venables said he expects Gabriel to play on Saturday as long as he passes his tests during the week.

Venables challenged his team after the loss to Texas.

“If we don’t like what they’re writing, let our play be our voice,” he said. “The criticism that has taken place is well-deserved. That’s how I look at it. Doesn’t mean our guys aren’t working and putting great effort into trying to be successful. I know. I see that every day.”

Oklahoma allowed 585 yards to Texas a week after giving up 668 to TCU.

“We’re not tackling very good right now, if everybody hasn’t noticed,” Venables said. “What we’re seeing through the course of the week isn’t translating consistently like it needs to just to play well. Not to play great, just to play well.”

Oklahoma receiver Marvin Mims is one of the best players in the Big 12, but he had just one catch for minus-2 yards against Texas. Mims has 23 catches for 436 yards this season. But Oklahoma stuck to the ground game against the Longhorns. He could be a threat again if Gabriel returns.

Kansas defensive end Lonnie Phelps ranks second among Big 12 players with six sacks. Keeping him away from Gabriel, if he plays, will be critical with Gabriel coming out of concussion protocol.

Oklahoma will honor former running back Prentice Gautt, the first Black scholarship football player at the school, by wearing a “Unity” uniform.

Gautt starred on coach Bud Wilkinson’s teams from 1957 to 1959. He was an All-Big Eight Conference selection twice and was an Academic All-American in 1958.

The uniform, designed by a group of the school’s athletes, will feature dark gray jerseys, pants and helmets with crimson trim and lettering. It will have the word “TOGETHER” sewn on the collar, the word “UNITY” on the back-of-the-jersey nameplate and an outline of the state of Oklahoma.

Venables on having multiple good quarterbacks: “I’ve seen other programs that have multiple good quarterbacks. Kansas is one of them. How are they doing it? I don’t know. Maybe I need to ask coach Leipold that and get a little wisdom from him. Both of those guys (Daniels and Bean) were not really highly recruited guys. Maybe that has something to do with it. I don’t know. They’ve done a good job culturally.”