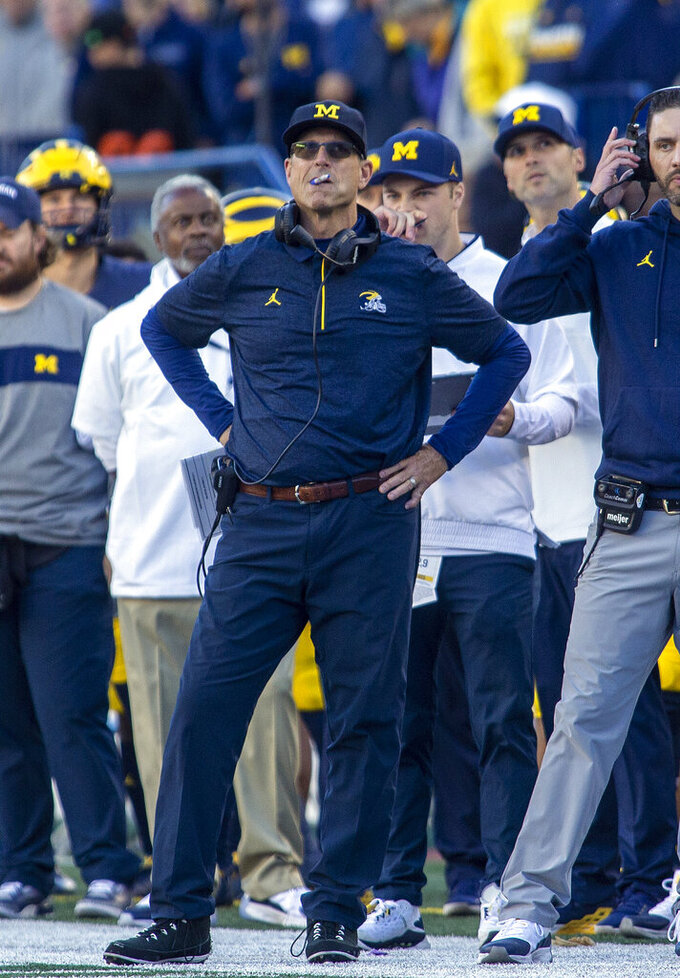 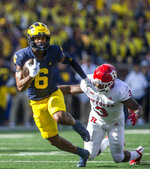 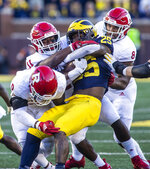 ANN ARBOR, Mich. (AP) — No. 19 Michigan found out, almost the hard way, that its running game can be slowed down.

Hassan Haskins ran for touchdowns the first two times the Wolverines had the ball to help them take a 17-point lead, but the undefeated team had to hold on to beat Rutgers 20-13 on Saturday.

“Gritty game," coach Jim Harbaugh said. “It wasn’t pretty, but when they start making a space for pretty on the scoreboard then we’ll worry about that."

Michigan (4-0, 1-0 Big Ten) opened conference play by running the ball on its first seven snaps and Harbaugh's conservative game plan almost cost him. After leading 20-3 at halftime, the Wolverines failed to pick up a first down on their first four possessions in the second half.

“We just couldn’t really find a rhythm and that’s the first time that’s happened when I’ve been in the game," quarterback Cade McNamara said.

The Scarlet Knights (3-1, 0-1) rallied from a 17-point, third-quarter deficit to pull within seven early in the fourth quarter, but Valentino Ambrosio missed a short field goal. On their next possession, they turned it over on downs and fell to 1 of 4 on fourth down.

“We’re going to be aggressive," Rutgers coach Greg Schiano said. “We’re not here to be close."

Michigan ended its drought without a first down late in the fourth quarter to set up a 47-yard field goal and a chance to earn a two-score lead, but Jake Moody missed it.

That gave Rutgers the ball with 1:49 left and no timeouts. Two snaps later, quarterback Noah Vedral fumbled for his team's first turnover of the season to seal the defeat.

Michigan entered the game averaging 350.3 yards rushing to lead the nation and was held to just 112 yards on the ground. Blake Corum was limited to 68 yards — half his average — on 21 attempts and Haskins ran for just 41 yards on 12 carries. McNamara was 9 of 16 for 163 yards passing for the Wolverines, missing some open receivers including one in the end zone.

“We know that’s not going to get the job done," McNamara said. “We have to get better for sure."

Isaih Pacheco had 107 yards rushing for the Scarlet Knights, who won their first three games for the first time since 2012. Vedral was 18 of 31 for 156 yards with a touchdown pass to Aaron Young in the third quarter, starting the comeback that fell short.

Rutgers: The program does not have a win over a ranked team since 2009, taking away any chance coaches and players go home proud of a moral victory.

“We came out here and we said, `We’re gonna find out how we stack up,'" Schiano said. “And, we found out. Bit short."

Michigan: Running the ball early and often worked well before the Big Ten season, but conference teams are going to force McNamara to throw more to beat them.

“When they load box like that, it’s going to come down to us beating man coverage," McNamara said. “And, I've got to do a better job."

Rutgers had a lot of success running the ball and at times by throwing it, but it tried and failed to fool the Wolverines sometimes on fourth downs. The Scarlet Knights converted only once in four tries.

Michigan linebacker Josh Ross, the team's leading tackler, left the game with a stinger and did not return.

Michigan might stay where it is, or possibly could slip some in the AP Top 25 after the lackluster victory.

Michigan: Goes on the road for the first time next Saturday to face Wisconsin. The No. 18 Badgers were were beaten 41-13 by No. 12 Notre Dame.