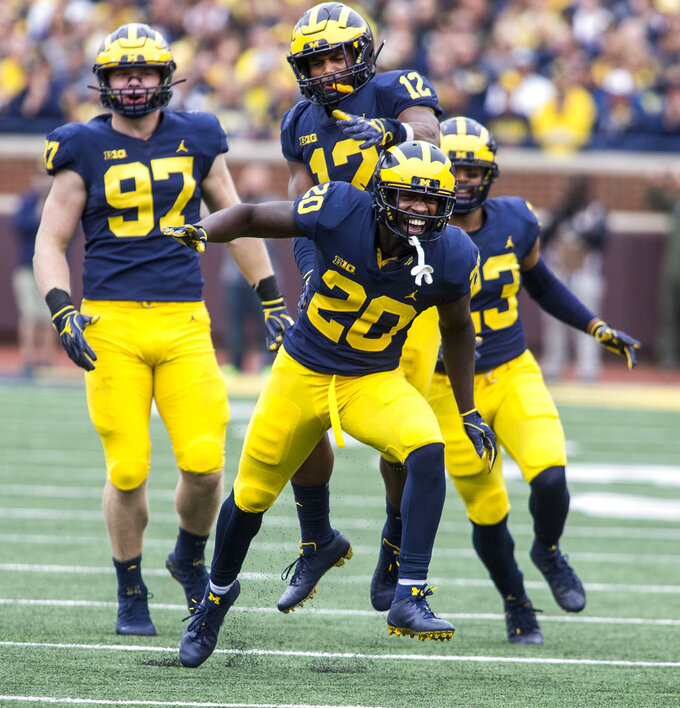 FILE - In this Sept. 8, 2018, file photo, Michigan defensive back Brad Hawkins (20) celebrates a tackle with teammates Aidan Hutchinson (97), Josh Ross (12), and Tyree Kinnel (23), in the third quarter of an NCAA college football game against Western Michigan, in Ann Arbor, Mich. Michigan’s defense, which returned nine starters from the unit that ranked No. 3 in the nation last year, play Nebraska on Saturday. (AP Photo/Tony Ding, File) 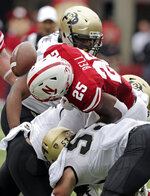 ANN ARBOR, Mich. (AP) — It didn't take long for Shea Patterson to get in a groove at Michigan.

"I've never been as comfortable," he said.

The 19th-ranked Wolverines (2-1) averaged 47 points in lopsided wins the last two weeks in large part because their quarterback has been very accurate and effective.

Michigan is determined to take a small step toward ending its 14-year Big Ten title drought by beating winless Nebraska (0-2) on Saturday at home in the conference opener for both teams.

Patterson threw three touchdown passes in each of the last two games, connecting on 74 percent of his passes for 362 yards and throwing a total of one interception against Western Michigan and SMU.

"Shea has been seeing the field really well," coach Jim Harbaugh said. "Making accurate throws on time, getting good protection for the most part. Receivers across the board have been catching the football, getting separation, getting open and finishing plays.

"That's been a positive, he said."

Patterson turned a potentially negative situation, playing for under-probation Mississippi, into something good by transferring to Michigan.

"I've grown a lot as a person and as a quarterback, too," he said. "I think coming here has really gotten me a lot better and more knowledgeable about the game of football."

Nebraska, meanwhile, is hoping quarterback Adrian Martinez can play for the first time since hurting his right knee late in the season-opening loss to Colorado.

How close is the freshman to being able to play?

Even though Martinez has made progress, Frost said it isn't that simple.

If Martinez isn't cleared to play, sophomore walk-on Andrew Bunch will make his second straight start. Bunch was 19 of 27 for 177 yards with two touchdowns and two interceptions in last week's loss to Troy.

Here are some other things know about the Nebraska-Michigan matchup:

Frost is looking for production from more wide receivers to complement Stanley Morgan Jr. and JD Spielman against Michigan's man-to-man defense. The pair has accounted for 19 of the 23 receptions by receivers through two games.

"These guys play a lot of man coverage, and they're going to be up in our face," Frost said. "You have to win, and right now we trust Stanley and JD to win. We need more guys to step up. It hurt us a little bit at end of games, these last two, because we had to play Stanley and JD a lot. Anybody would get tired as much as we're playing those guys."

Ben Mason came to Michigan last year as a linebacker, but has become a fullback, and is loving it.

"It's the epitome of football," Mason said. "You get to do a little bit of everything."

Mason had career highs with three rushing attempts for 6 yards and scored in last week's win over SMU.

Nebraska linebacker Mohamed Barry said a game against Michigan can be a defining game for a player at his position. Barry made a team-high 12 tackles in the opener against Colorado and leads the team with 15 despite getting ejected for targeting in the second quarter against Troy.

"It's a front-seven game," Barry said. "We have to hit them in the mouth and play Blackshirt football."

Nebraska is aiming to avoid its first 0-3 start since 1945. The Cornhuskers have lost six straight, dating to last season, for the first time since they closed 1957 with seven setbacks.