No. 19 Oregon looking for better start against Arizona 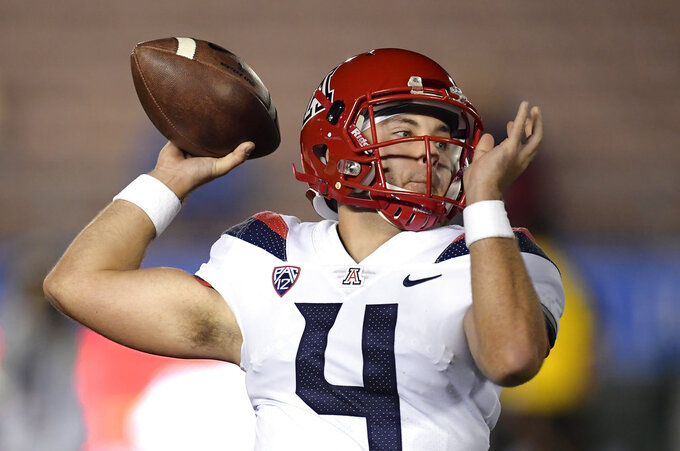 The No. 19 Ducks are still in the hunt, but a loss at Arizona on Saturday night could all but take them out of the race.

The key: Getting off to a better start.

Oregon started sluggish against the Cougars and played perhaps its worst first half of the season, falling behind 27-0 to prevent any chance of a rally in the 34-20 loss. That can't happen against a potentially explosive Arizona offense.

"At some point in time during the season you're going to be hit by some type of adversity. It has come," Ducks coach Mario Cristobal said. "They've done a tremendous job dealing with it and understand that if we don't do a better job preparing and starting a game it can happen again."

With the loss, Oregon (5-2, 2-2) dropped 1 1/2 games behind No. 15 Washington in the Pac-12 North, with Washington State and Stanford a game ahead. The Pac-12 is filled with tough games, so if the Ducks can get on a roll, they still have an outside shot of winning the division.

Oregon faces an Arizona team coming off a disappointing loss to UCLA.

Arizona has lost three of four and is still trying to find consistency in its first season under coach Kevin Sumlin.

A few more things to look for when Arizona hosts Oregon:

ARIZONA QBS: Khalil Tate has struggled this season after a stellar sophomore year, in large part because of a left ankle injury. He was unable to play last week and Rhett Rodriguez, son of former Arizona coach Rich Rodriguez, took his place against the Bruins. Rodriguez threw for 231 yards and two touchdowns on 15-of-34 passes with a pair of first-half interceptions.

"I thought Rhett did some things that were really good and there were some things he would take back," Sumlin said. "He's very, very critical of himself. But in the end, he gave us a chance to win the game. That's the takeaway."

Sumlin has not said if Tate will return this week.

OREGON'S O-LINE: The Ducks' offensive line was inconsistent against Washington State, leading to three sacks of Justin Herbert and an ineffective running game. Oregon finished with 58 yards rushing on 24 carries, though it had to abandon the run in the second half after falling behind so much.

"Overall, it was up and down," Cristobal said. "There were some positives, but certainly some things we need to improve upon."

STOPPING TAYLOR: A big key for Oregon's defense will be slowing Arizona running back J.J. Taylor. The sophomore is eighth nationally with 817 yards and has four touchdowns. Taylor is averaging nearly six yards per carry and had 154 yards and a score last week against UCLA. The Ducks are 22nd nationally against the run, allowing 116.3 yards per game.