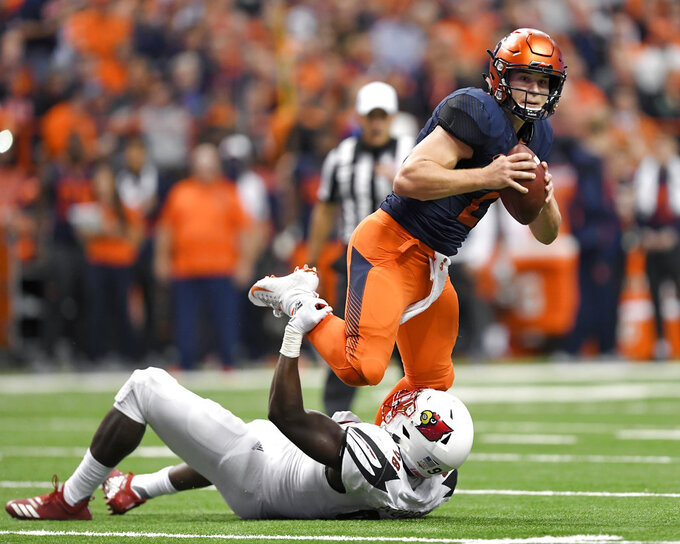 BOSTON (AP) — Syracuse quarterback Eric Dungey is questionable for the regular-season finale, and Boston College coach Steve Addazio says that's not much comfort for him.

Because backup Tommy DeVito isn't exactly a pushover, either.

"When I watch Tommy, he runs pretty good, too. And he throws the ball pretty good," Addazio said this week as the Eagles prepared for No. 19 Syracuse. "No two guys are exactly the same. But at the end of the day, they don't appear to me that they are changing their offense for Tommy DeVito."

Dungey reached for his lower back after a first-quarter run against Notre Dame last week and left the game. Coach Dino Babers gave no update on Dungey's status, but added the senior was able to get into a hot tub on his own Sunday.

"That hurts. He is a big part of this program," defensive end Kendall Coleman said. "Whoever's the next man up has got to step up. We all play behind him."

The next man up for Syracuse (8-3, 5-2 Atlantic Coast Conference) is DeVito, a redshirt freshman who would be making his first career start. DeVito has appeared in seven games this season, completing just over half of his passes for 525 yards and four touchdowns, with three interceptions.

"I really just tried to do my job and get the offense started," DeVito said this week. "Playing on the big stage, it's something new to us. Sometimes in the spotlight some people freeze a little bit. We'll be better going forward. We can't let this one affect us."

Dungey, who has missed 10 games in four seasons and parts of two others, has compiled 10,612 total yards and needs just 63 rushing yards to reach 2,000.

"Eric is probably, maybe the best quarterback in the conference," Addazio said. "He's tough and he's competitive and he's relentless and he just keeps the chains moving for them. I think he's a unique exceptional player. Tommy DeVito, the backup, is very, very good, as well.

Some other things to look for in Saturday's game:

WILL HE OR WON'T HE II

Boston College running back AJ Dillon isn't back to 100 percent, but Addazio said he was encouraged by the performance against Florida State, when Dillon carried 37 times for 116 yards, with some of the better runs coming near the end of the game.

"That's where we started seeing some of those runs again of his, those extra effort, just hard to bring down, punishing style of runs," Addazio said. "Is he still accelerating and cutting the way that he's capable of? Not yet. But I think he's gaining ground on this now."

Addazio said Dillon practiced more heading into the Florida State game than he had since he was hurt. And on Sunday, despite his biggest workload of the season, Dillon felt healthier than on the day after any of the other games since the injury.

After four straight losing seasons, Syracuse is already eligible for a bowl game for the first time since 2013. The Orange can finish as high as second in the conference with a win on Saturday — or fall into the middle of the pack with a loss. They had been ranked as high as No. 12 in The Associated Press Top 25.

BC (7-4, 4-3) was 7-2 and ranked No. 17 after victories against Miami and at Virginia Tech, and the Eagles had a chance at their first 10-win season since Matt Ryan was the quarterback.

That would be the next step the program was hoping for after back-to-back 7-6 seasons.

After losses to second-ranked Clemson and to Florida State, they're still stuck on seven wins and trying to stave off a three-game losing streak

"You're coming off of a tough deal, and part of the process is, 'We've got all this great stuff in front of us,'" Addazio said. "It's meaningful, just like if you had a team that had two wins."