No. 19 Tulane looks to end No. 21 Cincinnati's home streak 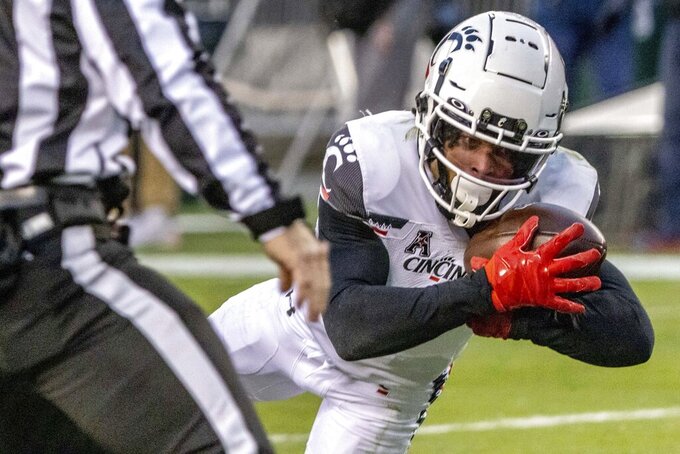 Cincinnati wide receiver Tre Tucker leaps into the end zone for a touchdown in the first half of an NCAA college football game against Temple, Saturday, Nov. 19, 2022, in Philadelphia. (AP Photo/Laurence Kesterson)

Line: Cincinnati by 2/12, according to FanDuel Sportsbook.

The winner will host the American Athletic Conference championship game on Dec. 3. A win by the two-time defending AAC champion Bearcats would put them in the AAC title game for the fourth straight season. They have hosted the past two title games.

The Bearcats rushing defense needs to contain Tulane RB Tyjae Spears who has averaged 11.7 yards per carry in November. Spears has combined for 290 rushing yards in the first quarter over the past three games. He is four yards shy of 1,000 for the season and has 12 TDs.

Tulane: QB Michael Pratt is a dual threat. In last week’s win over SMU, Pratt passed for 141 yards and three TDs while rushing for 70 yards and three TDs. He ranks second in the AAC in pass efficiency (157.29) and has four interceptions, fewest in the league.

Cincinnati: LB Ivan Pace Jr. is a disruptive force on the Bearcats defense. The Butkus Award finalist is the only player in the nation to rank in the top 10 in tackles for loss (19), sacks (9), and total tackles (107).

Cincinnati owns the nation’s second-longest home winning streak at 32, trailing only Clemson (40). The Bearcats haven’t lost at Nippert since a 35-24 defeat to Temple on Nov. 10, 2017. … After making all three of his field goal attempts and both extra points in the Bearcats’ 23-3 win at Temple last week, Ryan Coe was named AAC special teams player of the week. … Cincinnati is ranked in the AP top 25 for the seventh time this season. … Tulane has six AAC wins for the first time. The six conference wins are the most for the Green Wave since 1998 when they won six Conference USA games.