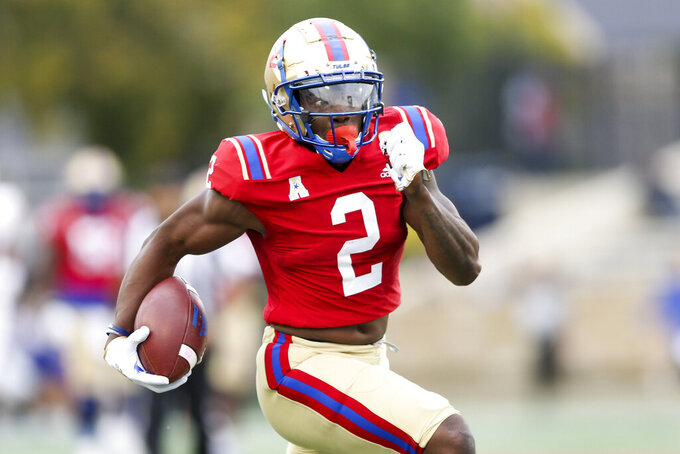 Tulsa wide receiver Keylon Stokes (2) runs towards the end zone while scoring a touchdown during the fourth quarter during a football game between Tulsa and SMU at Skelly Field at H.A Chapman Stadium in Tulsa, Okla. on Saturday, Oct. 29, 2022.(Ian Maule/Tulsa World via AP)

Line: Tulane by 7 1/2, according to FanDuel Sportsbook.

A win will keep Tulane in the Top 25, but a loss would likely mean an exit from the poll. A victory keeps the Green Wave undefeated in the AAC standings. Challenging games at home against No. 25 UCF, SMU, and Cincinnati remain on the schedule. For Tulsa, an upset would give it a good chance to make a third consecutive bowl game. A loss would mean it has to win its final three games at Memphis, at home against USF, and at Houston to become bowl eligible.

Tulsa’s defense has played well against Tulane quarterback Michael Pratt in two previous victories. The Golden Hurricane must find a way to curtail Pratt’s running skills, as well as keep him from completing long passes. Pratt averages 245.4 yards per game passing and 30.7 yards rushing per game. Tulsa only allows 182.9 yards passing per game.

Tulane: Tyjae Spears leads Tulane with 588 yards and nine touchdowns rushing. He ran for 104 yards on 14 carries last season against Tulsa. He is coming off a 24-carry, 125-yard game against Memphis. He could have a big day against Tulsa defense that gives up 210 yards per game on the ground.

Tulsa: Keylon Stokes is Tulsa’s career receiving yards leader with 3,474 yards, having broken Howard Twilley’s 57-year old record two weeks ago. He is third in the nation with 924 yards this season. He has 53 receptions and five touchdowns.

Tulsa has won the last two games in the series, is 7-1 at home against Tulane, and 5-4 at Tulane. ... Current Tulsa Athletic Director Rick Dickson was the Tulane AD from 2000-15. His first AD job was at Tulsa, in his hometown and at the school where he was a defensive back from 1990-94. ... Tulane’s ranking is the first in school history in the nine years of CFP rankings.