No. 19 Washington State seeks 4-0 start when they face UCLA 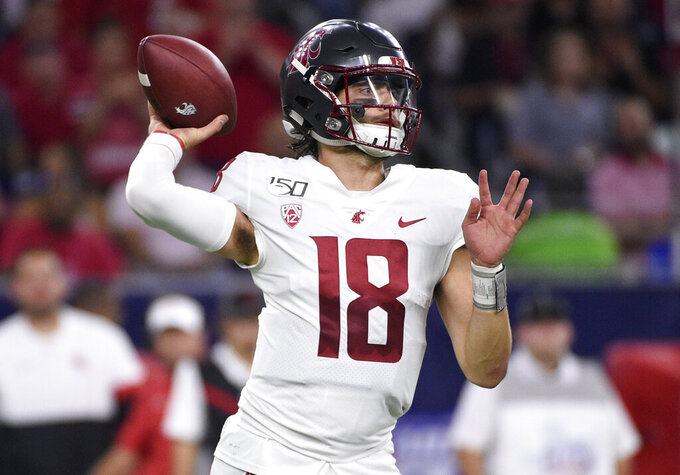 Washington State is seeking a third consecutive win over UCLA, and a second 4-0 start to a season since 2017. It's the Pac-12 opener for both teams, and UCLA is seeking its first win of the season after three losses.

Washington State's highly productive pass attack is averaging nearly 50 points per game, while UCLA is struggling on offense, scoring 14 points in each of their three losses.

UCLA: Quarterback Dorian Thompson-Robinson is a dual threat who had some success running in last week's 48-14 loss to No. 5 Oklahoma, and he may try to do more running against the Cougars.

Washington State: Quarterback Anthony Gordon has started three games in his career, and after two of them has been named the Pac-12 Offensive Player of the Week. Gordon averages 441.3 passing yards per game and has thrown for 12 touchdowns, both of which lead the nation. His top target is Brandon Arconado, who has 23 receptions for 308 yards.

Washington State has started 3-0 for the third consecutive season, a first since the 1907-09 campaigns. ... The Cougars are 15-1 at home over the past three seasons. ... UCLA is the only Pac-12 team averaging fewer than 300 offensive yards per game at 263. ... The Bruins are 3-15 in two seasons under coach Chip Kelly. ... This is the first meeting between the two programs since 2016. ... WSU leads nation with 476 passing yards per game. ... The Cougars also lead the nation with seven fumble recoveries. ... The Bruins seek their first win over ranked opponent since 2015.