No. 19 Wisconsin faces test from USF in season opener 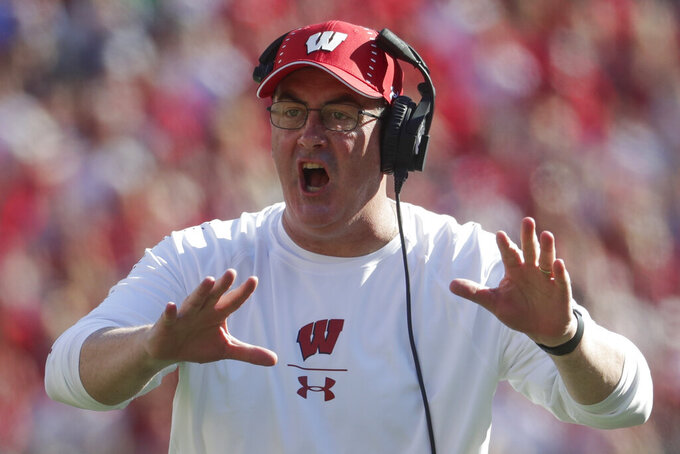 FILE - In this Sept. 15, 2018, file photo, Wisconsin head coach Paul Chryst argues a call during the first half of an NCAA college football game against BYU, in Madison, Wis. Wisconsin coach Paul Chryst likes the idea a good early-season test and expects the 19th-ranked Badgers to get one when they visit South Florida. (AP Photo/Morry Gash, File)

The Badgers, who've played in the Big Ten championship game three of the past five years, entered last season with expectations of contending for a spot in the College Football Playoff. Instead, they slipped to 8-5 and failed to win 10 or more games for first time under Chryst.

"Every first game, you're going to find out a lot about yourself," Chryst said. "You're going to get tested in ways that maybe you could anticipate and don't anticipate."

South Florida is not a typical challenge for a program the caliber of Wisconsin, which rarely hits the road so early to face a non-Power Five conference opponent as talented as the Bulls.

USF started 7-0 and climbed into the Top 25 before finishing last season on a six-game losing streak, a collapse that coach Charlie Strong has difficulty explaining. The Bulls were a combined 21-4 the previous two years.

"We're not going to let that define us and how good we can be," said Strong, entering his third season at USF "I like the (mind-set) we're in."

Wisconsin is the highest ranked team USF has faced in a season opener at home. The Bulls are 0-3 vs. Top 25 opponents under Strong. They're 11-25 all-time against ranked teams, with seven of those victories coming at Raymond James Stadium.

STOP ME IF YOU CAN

Wisconsin's Jonathan Taylor led the nation in rushing last season, finishing with 2,194 yards and 16 touchdowns. The 5-foot-11, 219-pound junior has produced 4,171 yards since the start of 2017. It's the most by a FBS runner in the first two years of a career.

That's something the Bulls didn't do well a year ago, when they yielded 247.5 yards per game on the ground to rank 11th among 12 teams in the American Athletic Conference.

"It's a very dynamic offense. There's a lot of moving parts to it, but when things are part together well, it's something special," Bulls quarterback Blake Barnett said. "I think things came together well in fall camp, and the jump from spring to now has been tremendous."

"I know a little bit about Kerwin and what he's done. He's a good football coach. It's going to be a good plan," he said. "The same thing on defense. They're going to have a good plan and good players."

USF has won five in a row against Power Five conference opponents, including Illinois and Georgia Tech last season. The Bulls' lone loss in their last eight vs. Power Five schools was a 55-35 home loss to Florida State in 2016.

"In order to take this program where you want to take it, we have to play these games," said Strong, whose team will face Georgia Tech on the road next week. "Our guys understand that challenge."