No. 19 Wisconsin to start QB Jack Coan in season opener 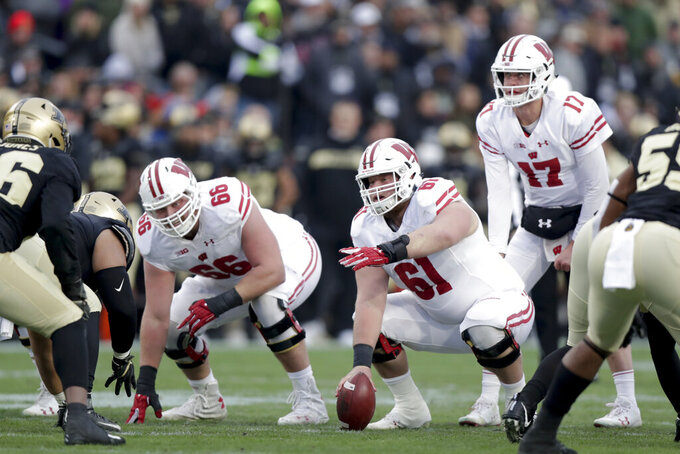 FILE - In this Nov. 17, 2018, file photo, Wisconsin's Tyler Biadasz (61) gestures as he prepares to snap the ball to quarterback Jack Coan during the first half against Purdue in an NCAA college football game in West Lafayette, Ind. Returning starting center Biadasz, who underwent hip surgery during the offseason, will anchor the line after earning first-team All-Big Ten honors in 2018. (AP Photo/Michael Conroy, File)

MADISON, Wis. (AP) — There was no formal announcement on Sunday when Jack Coan was named starter at quarterback for 19th-ranked Wisconsin, which opens the season Friday at South Florida.

The news came as no surprise, since Coan took the first-team reps in fall camp, ahead of Chase Wolf and highly touted freshman Graham Mertz. The two were co-listed as backups on the depth chart, with Danny Vanden Boom rounding out the group.

"There was never really the talk or anything, it's just when the ones go out, I go out," Coan said. "Ever since I got here, I view myself as the starter and put myself in the starter shoes, so I don't think that anything is going to change."

Coan is the only quarterback with significant experience following the departure of three-year starter Alex Hornibrook, who transferred to Florida State in March.

Coan, a junior, played in five games last year, starting the last four when Hornibrook was out with a concussion, and threw for 515 yards, five touchdowns and three interceptions. He led the Badgers to a 35-3 victory over Miami in the Pinstripe Bowl.

Offensive lineman Tyler Biadasz, who was named to the AP preseason All-American first team, said Coan made a conscious effort to build relationships and communications during the offseason and camp.

"Since last year, you could tell that he really wanted it a little more, and you could tell the way he commanded the huddle and the way he handled stuff off the field — building more connections with everyone on our team," Biadasz said. "I really, truly believe that he wanted it more than those other three quarterbacks. He truly put himself out there; he's one of the leaders on our team."

Coach Paul Chryst said the quarterback group, as a whole, had a good camp. But Coan took his work to a higher level. The coaching staff was impressed with Coan's understanding of team concepts, command of the offense and drop footwork.

Chryst also mentioned Coan's comfort level playing with Badgers wide receivers A.J. Taylor, Danny Davis, Kendric Pryor and Quintez Cephus, who the NCAA declared eligible to play on Friday, a year after he was suspended following a sexual assault allegation that resulted in his acquittal by a jury at trial.

"I think a big part of it is he's trusting the work that he's putting in," Chryst said of Coan. "The more you play with guys, you develop trust in them.

"You trust yourself from the work you put in, but it's also knowing the other guys and what they've done together. That's helpful."