No. 2 Alabama hosts Southern Miss in another hot day game 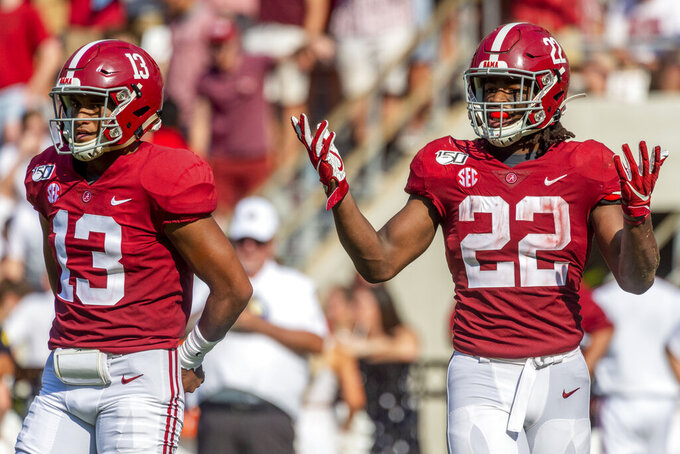 Alabama quarterback Tua Tagovailoa (13) and running back Najee Harris (22) look back to the sideline for a play during the first half of an NCAA college football game against New Mexico State, Saturday, Sept. 7, 2019, in Tuscaloosa, Ala. (AP Photo/Vasha Hunt)

TUSCALOOSA, Ala. (AP) — Alabama officials have bemoaned daytime September games where heat takes a toll on players and fans alike.

They're no Saturday afternoon picnic for opposing teams either.

The second-ranked Crimson Tide welcomes the latest big underdog Saturday when Southern Miss visits for a game that kicks off before lunchtime. If oddsmakers' 39-point spread holds true, the kickoff time will have supplied the biggest drama.

Alabama's athletic director Greg Byrne and president Stuart R. Bell issued a statement when the start time was announced saying they were "disappointed" with another daytime home game. That followed a steamy 62-10 win over New Mexico State two weeks ago.

Temperatures should be a few degrees cooler for this one, down to the low 90s at kickoff.

"This is going to be a real challenge for us but we are focused on what we need to do as a team to get our guys better and play to a standard that we'd like to play to for 60 minutes in the game," Tide coach Nick Saban said.

Alabama hasn't faced much of a challenge yet, with last week's 24-point win at South Carolina the tightest margin so far. And five of the next six games are at Bryant-Denny Stadium, where the Tide has won 27 straight games.

Southern Miss is playing in the state of Alabama for the second straight week. The Golden Eagles are coming off a 47-42 win at Troy .

This will be a much bigger challenge on both sides of the ball.

"We've got to make sure we play great in all phases — offensively, defensively and special teams," Southern Miss coach Jay Hopson said. "It's no secret we're playing an outstanding football team, a great football team. We're going to have to certainly be on our A-plus game this week.

"There's no team that is going to have our respect more than Alabama."

Some other things to look for in the Southern Miss-Alabama game:

Alabama quarterback Tua Tagovailoa has lived up to his billing as one of the leading Heisman Trophy candidates. Tagovailoa has thrown for 12 touchdowns without an interception while completing 76.9 percent of his passes. Abraham is averaging 330 passing yards per game, with five touchdowns against three interceptions.

Alabama could have four freshman starters on the front seven. Defensive end Justin Eboigbe is expected to replace an injured LaBryan Ray. He'd join inside linebackers Shane Lee and Christian Harris and nose guard DJ Dale in the starting lineup, if the Tide sticks with the group from the first three games. Eboigbe has only played in one game and hasn't recorded a stat.

Southern Miss has a huge special teams threat in Jaylond Adams . Adams has returned two kicks and a punt for a touchdown on just nine combined returns.

"He's an exceptional returner, arguably one of the best in college football," Alabama receiver and kick returner Henry Ruggs III said. "Of course, they have a good scheme, a team that takes passion in the return game. Special teams is a big part of the game and they have been having success with it."

Alabama is the highest ranked opponent Southern Miss has faced since playing No. 2 Florida on Aug. 30, 1997. The Gators won 21-6. The Golden Eagles' last win over a Top 10 team came against then-No. 7 Houston in the 2011 Conference USA championship game, with a score of 49-28.

The two teams have met 43 times, all in the state of Alabama: Tuscaloosa, Birmingham, Montgomery and Mobile. The teams played annually from 1992-2005, and Alabama has won the last six meetings.