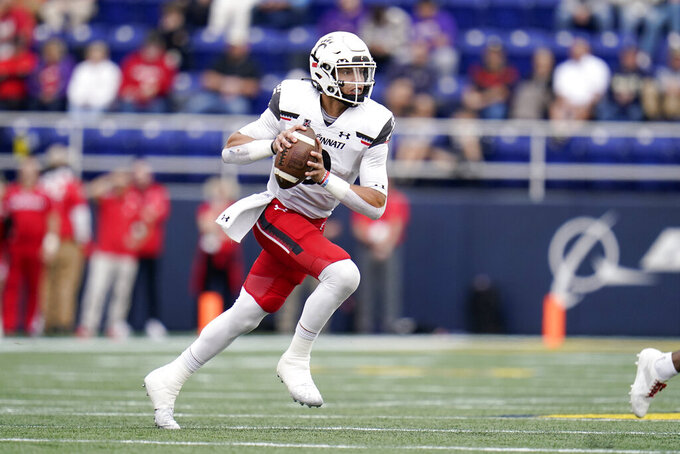 NEW ORLEANS (AP) — Cincinnati coach Luke Fickell and the No. 2 Bearcats' sound eager to prove that a close call at unranked Navy last week was more of a mirage than a potential sign of weakness.

That could spell trouble for reeling Tulane (1-6, 0-3 American), which has never beaten a top-five team in its history, and hasn’t beaten a Division I FBS team this season.

On Saturday, Cincinnati (7-0, 3-0) will become the highest-ranked team to play in Tulane's on-campus Yulman Stadium, which opened in 2014. But the Bearcats looked a bit vulnerable while narrowly holding off four-touchdown underdog Navy 27-20 last Saturday.

“An incredible lesson for us,” Fickell said. “We got to continue to do a better job of handling all the things that come along with the successes, the wins, the attention.”

Oddsmakers aren't giving the Wave much chance, favoring Cincinnati by more than three touchdowns, according to FanDuel Sportsbook.

Tulane went to bowl games the past three years and was seen as a potential contender in the American Athletic Conference entering this season. Their season-opening five-point loss at Oklahoma in a game moved from New Orleans because of Hurricane Ida briefly prolonged such expectations.

But after Tulane defeated FCS-level Morgan State, the Wave slid into a five-game skid.

“It’s obviously been a difficult year,” head coach Willie Fritz said. "All I know is that you’ve just got to keep after it and keep grinding and stay as positive as you possibly can.

“We’re not going to sit around and hold hands and sing songs all day,” Fritz added. “We have to point it out when guys are screwing up and we’re doing that as well. But you have got to stay positive with it. I’ve met with the captains a few times and we’re changing some things.”

While Cincinnati senior quarterback Desmond Ridder is one of the Bearcats' best players and the winningest active QB in college football, Tulane wasn't even sure this week who its QB would be.

Starter Michael Pratt took a heavy hit in a 55-26 loss at No. 19 SMU last week and entered this week in a concussion protocol.

“We’re not sure what’s going to happen with him right now," Fritz said. “We’re hoping he’s going to be able to play.”

Fritz said running back Josh Coltrin and receiver Christian Daniels — who both played QB in high school — were practicing this week as QBs because regular backup Justin Ibietta also is hurt.

Tulane has allowed 46 points per game against its six FBS opponents this season. Now Fritz is talking about scaling back the complexity of defensive players' assignments in the hope of having fewer cross-ups and busts under first-year coordinator Chris Hampton.

“We’re simplifying a little bit," Fritz said. "We want to make sure we’re correct on everything.

“You can’t be so simple that they know exactly how you’re lining up every play, nowadays that’s a recipe for disaster,” Fritz continued. “But we want to make sure we’re doing a good job and that our guys understand their assignment, do their job and carry it out.”

Bearcats junior running back Jerome Ford is tied for first in the nation in TDs rushing with 13, matching Marshall’s Rasheen Ali and Louisville’s Malik Cunningham.

Tulane's most explosive offensive player this season has been third-year running back Tyjae Sprears, who is coming back from a torn ACL in 2020. Although he played sparingly earlier this season, he has averaged 5.3 yards per carry, including a long run of 39 yards, and leads Tulane running backs with three TDs rushing.