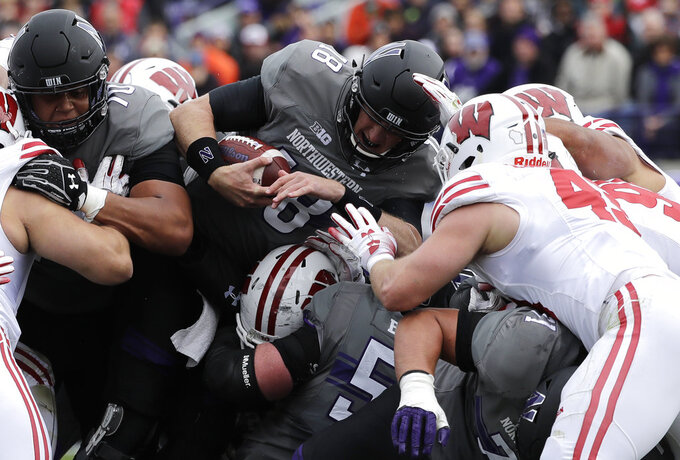 Northwestern quarterback Clayton Thorson (18) jumps with the ball against Northwestern during the first half of an NCAA college football game in Evanston, Ill., Saturday, Oct. 27, 2018. (AP Photo/Nam Y. Huh)

Lawrence completed 20 of 37 passes for 314 yards before leaving late in the third quarter. Tee Higgins and Amari Rodgers each had two touchdown receptions.

The Tigers (8-0, 5-0 Atlantic Coast Conference) moved to 8-0 for the seventh time in school history, including the third time in the last four seasons. They were dominant in the second quarter, scoring four touchdowns on consecutive drives en route to their fourth straight victory over the Seminoles.

Florida State (4-4, 2-4) suffered its most-lopsided defeat at home — surpassing a 58-14 loss to Southern Miss in 1981. It also was the most points allowed by the Seminoles at Doak Campbell Stadium.

JaFar Armstrong added a rushing touchdown for the Fighting Irish. They are 8-0 for the first time since 2012, when they remained undefeated until being routed by Alabama in the BCS national title game.

Notre Dame had 584 yards of total offense as it extended its dominance in the oldest continual intersectional rivalry to 78-13-1.

Playing in San Diego for the first time, Notre Dame used its superior size and talent to take a 27-0 lead just before halftime. While the defense kept Navy's triple option in check, Book was remarkably efficient as he kept the Midshipmen off-balance with lots of play-action. He completed 27 of 33 passes, to 10 receivers. He threw one interception.

Cornelius completed 23 of 34 passes for 321 yards, and his scoring run on third-and-10 gave Oklahoma State (5-3, 2-3 Big 12) a 38-28 lead after its 31-14 halftime advantage had been whittled down to just three points. Tylan Wallace had 10 receptions for 222 yards and two touchdowns. The Cowboys snapped a two-game losing streak.

For Texas (6-2, 4-1), Sam Ehlinger returned from a shoulder injury suffered in the previous game. After struggling a bit in the first half, Ehlinger completed 17 of 27 passes for 175 yards and two touchdowns in the second half.

Tre Watson's 1-yard touchdown run with 1:46 remaining pulled Texas to 38-35, but Dillon Stoner recovered the ensuing onsides kick for Oklahoma State. The Cowboys were then able to run out the clock after Cornelius gained a first down on third-and-4 with an 8-yard rush.

The Bulldogs took advantage of Florida's three turnovers and an injury to cornerback C.J. Henderson to win the "World's Largest Outdoor Cocktail Party" for the second straight year.

Fromm completed 17 of 24 passes for 240 yards, none bigger than the three for scores — all on third down. The first two went to Jeremiah Holloman, who beat C.J. McWilliams both times.

The Bulldogs (7-1, 5-1 Southeastern Conference) clearly were picking on McWilliams after he replaced Henderson (back) on the first series. Florida (6-2, 4-2) took a one-point lead early in the third quarter — Feleipe Franks threw a perfect, 36-yard touchdown pass to Freddie Swain — but Georgia answered with another Fromm-to-Holloman connection and then pulled away late.

The Sooners (7-1, 4-1 Big 12) rolled up a season-high 702 total yards and only punted once, and that was in the fourth quarter after Murray was done for the day.

CeeDee Lamb caught four passes for a career-high 160 yards and two touchdowns, and Kennedy Brooks ran for 94 yards and two scores. The Sooners won their second straight since losing to Texas.

The Sooners gained 209 yards in the first quarter and took a 17-0 lead. Murray threw two touchdown passes in the period, including an 82-yard connection with Lamb.

Kentucky took over on its own 19 with 1:24 left. With 4 seconds left, Wilson threw toward Ahmad Wagner in the back left corner of the end zone. Wagner caught the ball out of bounds, but Missouri cornerback DeMarkus Acy was called for pass interference, giving Kentucky an untimed down that it turned into the winning score.

Wilson, who was replaced by backup Gunnar Hoak for part of the second half, completed 22 of 31 passes for 267 yards. Bowden had 13 catches for 166 yards. Benny Snell, who entered the game as the nation's fourth-leading rusher, gained just 67 yards on 19 carries.

STANFORD, Calif. (AP) — Gardner Minshew completed his first 19 passes of the second half and drove No. 14 Washington State to a 42-yard field goal by Blake Mazza with 19 seconds remaining to put the Cougars in sole possession of first place in the Pac-12 North.

Minshew completed 40 of 50 passes for 438 yards and three touchdowns to lead the Cougars (7-1, 4-1 Pac-12) to their third straight win over the Cardinal (5-3, 3-2). This victory follows last week's over then-No. 12 Oregon, giving Washington State back-to-back wins over ranked opponents for the first time since 2002.

Minshew engineered the winning drive in the final 1:25 with the big play coming on a 35-yard pass to Jamire Calvin on third-and-2 from the 33. Minshew completed one more pass to move the ball to the 25 and after two incomplete passes, Mazza made his kick to win it.

BERKELEY, Calif. (AP) — Linebacker Evan Weaver scored on a 36-yard interception return in the third quarter after Washington made a change at quarterback, and California overcome a sluggish day offensively.

The Golden Bears (5-3, 2-3 Pac-12) had only 245 yards and were limited to two field goals, but Weaver and the defense repeatedly bailed out the struggling offense while dealing a serious blow to Washington's hopes of a second Pac-12 title in three seasons.

The Huskies (6-3, 4-2) entered the day with a half-game lead over No. 14 Washington State and No. 24 Stanford but fell to second place despite not allowing an offensive touchdown.

Washington starting quarterback Jake Browning threw his 90th career touchdown pass in the first quarter but was benched late in the third after the Huskies went three-and-out on their second drive of the second half. Redshirt freshman Jake Haener replaced Browning and threw an incompletion on his first pass before Weaver picked off the pass on a third-and-8 play.

Browning returned after two series. He completed 11 of 21 passes for 148 yards.

Mississippi State (5-3, 2-3 Southeastern Conference) won thanks to an unexpected boost from its passing game, which was among the least productive in the SEC coming into the night. One week after throwing four interceptions in a miserable loss to LSU, Fitzgerald completed 14 of 22 passes, including several big gains that swung the game in favor of the Bulldogs.

The biggest might have been a 84-yard strike to Stephen Guidry on third-and-21 that set up a 1-yard touchdown run by Fitzgerald and gave the Bulldogs a 21-13 lead early in the fourth quarter.

Mississippi State's defense was able to take it from there, and Erroll Thompson's interception in the end zone with 2:36 remaining — along with Fitzgerald's 76-yard touchdown run on the ensuing drive — sealed the victory. Texas A&M (5-3, 3-2) had its three-game winning streak snapped.

STATE COLLEGE, Pa. (AP) — Nick Scott intercepted a pass to thwart Iowa at the Penn State 2 with 3:18 left and the Nittany Lions held on to avoid a third straight home loss.

On fourth-and-10 with 7 seconds left, Penn State's pass rush swarmed Nate Stanley, who flipped backward to offensive tackle Tristan Wirfs. The 300-pounder rumbled 15 yards before being dragged down with no time left.

It was a fitting end to an odd game with little sustained offense. Iowa scored on two safeties and a touchdown pass by punter Colten Rastetter to defensive tackle Sam Brincks on a faked field goal in the first half. Penn State played three series in the second quarter without starting quarterback Trace McSorley.

Arizona (4-5, 3-3 Pac-12) jumped on the Ducks early and never let them up, turning one Oregon miscue after another into scores.

Oregon (5-3, 2-3) got off to a slow start for the second straight week, committed three turnovers and two costly mistakes on special teams. The Ducks had 270 total yards — 190 below their average— against one of the Pac-12's worst defenses.

The first-place Wildcats (5-3, 5-1) solidified themselves as contenders for the Big Ten West championship while gaining some revenge for a loss at Camp Randall Stadium early last season.

With quarterback Alex Hornibrook sidelined by a concussion and the defense without several injured starters, it was a rough afternoon for Wisconsin (5-3, 3-2). Northwestern turned two fumbles by Jonathan Taylor and another by quarterback Jack Coan into 17 points on the way to its fourth straight victory.

HOUSTON (AP) — D'Eriq King had a hand in a career-high seven touchdowns, throwing for 419 yards and five scores and running for 134 yards and two more touchdowns for Houston.

Blake Barnett finished 26 of 39 for 263 yards and a touchdown for South Florida (7-1, 3-1) and Johnny Ford rushed for 106 yards and two touchdowns. The Bulls had won eight straight.

SYRACUSE, N.Y. (AP) — Eric Dungey threw for three touchdowns and ran for another, and Syracuse held off North Carolina State to become eligible for the postseason for the first time in five years.

Syracuse (6-2, 3-2 Atlantic Coast Conference), which snapped a two-game losing streak last time out with a 40-37, double-overtime victory over North Carolina, improved to 5-0 in the Carrier Dome.

N.C. State (5-2, 2-2), which was coming off its first loss of the season, a 41-7 thrashing at No. 2 Clemson, fell behind early, rallied, then ran out of time at the end. Orange linebacker Andrew Armstrong sealed the victory with an interception at the Wolfpack 23-yard line with 2:18 left.

Dungey finished 27 of 38 for 411 yards passing with zero turnovers.