No. 2 Clemson's plays amid storm for 38-7 win vs Ga Southern 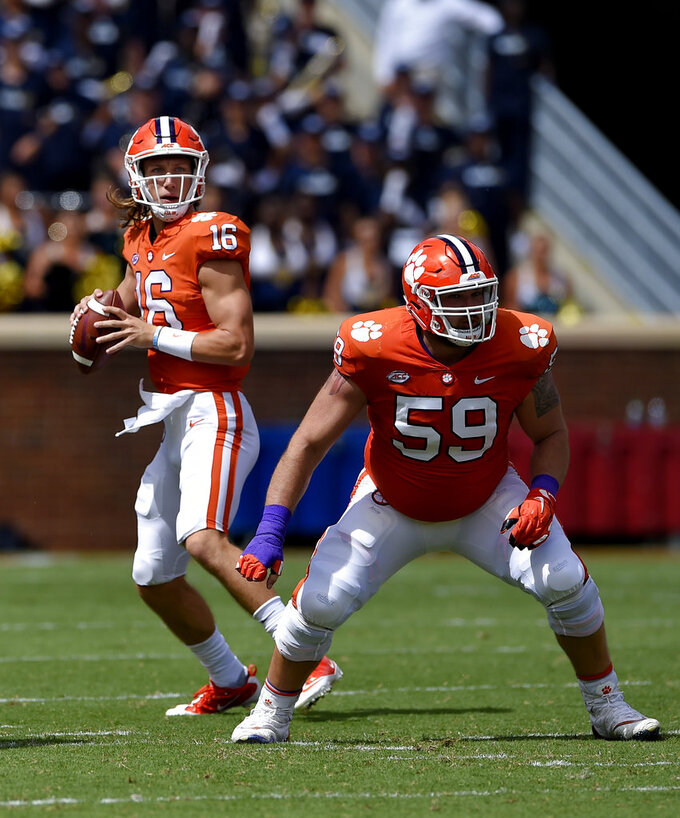 Clemson quarterback Trevor Lawrence drops back to pass with blocking help from Gage Cervenka (59) during the first half of an NCAA college football game against Georgia Southern, Saturday, Sept. 15, 2018, in Clemson, S.C. (AP Photo/Richard Shiro) 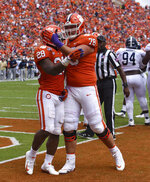 CLEMSON, S.C. (AP) — A week of worry at No. 2 Clemson over a powerhouse storm ended in victory in front of a supportive full house at Memorial Stadium.

The Tigers (3-0) got a career-best 162 yards rushing and two touchdowns from Travis Etienne to defeat Georgia Southern 38-7 on Saturday, capping an unusual week for Clemson — the only major college team in the Carolinas and Virginia that did not call off its game because of Florence.

Coach Dabo Swinney was grateful the weather held out and the fans showed up.

"I really didn't know what to expect," Swinney said. "We almost had a full house." Elsewhere in South Carolina, the slow-moving tropical storm was displacing people and destroying property.

"There's still a tremendous amount of devastation people are dealing with," Swinney said. "But I told our guys, maybe we can somebody's mind off things they're going through today."

Trevor Lawrence threw for 194 yards including a 57-yard score to fellow freshman Justyn Ross in its first-ever meeting with Georgia Southern (2-1) of the Sun Belt Conference.

Clemson officials did move the game up to noon instead of its planned 3:30 p.m. ET start in deference to Florence, which was at one point a Category 4 hurricane.

Co-offensive coordinator Jeff Scott thought his players were locked in at practice this week and not worried about the approaching storm. "I didn't really get a sense overall there were a lot of distractions," he said. "Coach Swinney was pretty confident to them that we were going to get an opportunity to play."

At kickoff, though, the crowd of 79,844 had sunny skies and mild breezes for tailgates like many football Saturdays. Conditions changed by halftime with bands of grey clouds over the stadium and the wind picking up. Florence's drenching rains were forecast to hit the area later tonight and Sunday.

It was a long, fatiguing, "Will they or won't they?" week, with people debating whether Clemson should even.

The Tigers start did not seem focused. Clemson had two of its three turnovers in the opening quarter on Kelly Bryant's interception and Adam Choice's fumble. Throw in Greg Huegel's missed field goal — his first of two on the day — and the Tigers were tied 0-0 against an opponent they were favored to beat by five touchdowns after the opening quarter.

Clemson's offense finally kicked in in the second quarter with Etienne ending a 93-yard drive on a fourth-and-goal TD from the 1.

Lawrence followed with his long touchdown throw to Ross and Bryant came back in a series later to lead a scoring drive with Tavien Feaster's 1-yard touchdown.

Clemson's defense shut down Georgia Southern's option offense. The Eagles came in fourth in the country averaging 326 yards rushing its first two games. They managed just 20 yards and one first down the first two quarters.

Clemson outgained Georgia Southern 595 to 140. The Tigers defense finished with five sacks, two of them by end Austin Bryant.

Bryant said his side of the ball was not frustrated early on with Clemson's missed scoring chances. "We were desperate to help our teammates," he said. "We've played hard, but we've only scratched the surface."

The players got a boost from the loud crowd, Scott said.

"Earlier in the week, you didn't know who was going to show up," he said. "As coaches and team we were not surprised (with the crowd.) That's rare."

Georgia Southern quarterback Shai Werts, from Clinton about 90 minutes southeast of Clemson, was pleased that the Eagles worked hard throughout even in defeat. "It's something we can learn from on the off week and get better at," he said.

Georgia Southern: The Eagles don't yet have enough to match up with Power Five teams like the Tigers. Georgia Southern's next win, though, will surpass its victory total from last year.

Clemson: The Tigers had very little to gain in this one, except perhaps preserving their mid-season off week by not having to cancel the game with Georgia Southern due to Florence.

Clemson quarterback Kelly Bryant did not return for the second half after he fell hard in the second quarter. Bryant went back in in the period, but was taken to the locker room. Clemson coach Dabo Swinney said on ESPN Bryant told him he was breathing heavy.

Swinney said after the game Bryant had a chest bruise and would be OK.

Georgia Southern is off next week before starting Sun Belt Conference play against Arkansas State on Sept. 29.