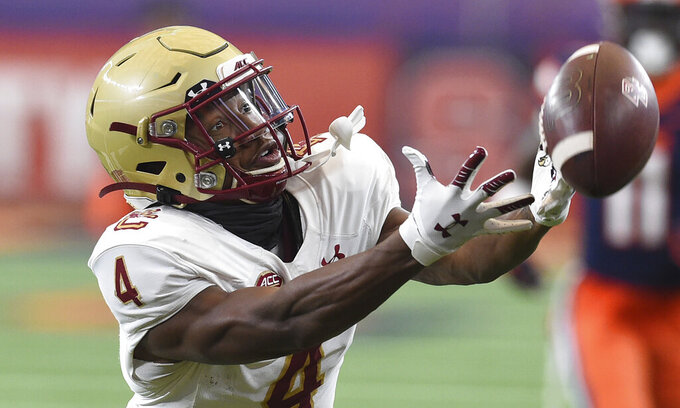 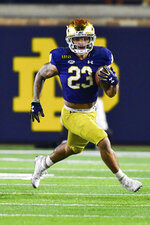 Coming off a thrilling 47-40 double OT win over previously top-ranked Clemson, Notre Dame is in prime position for a run to the ACC title game and a spot in the College Football Playoff. The Irish can’t afford a letdown with a tough matchup at North Carolina the following week. A victory would give Boston College first-year coach Jeff Hafley a signature win for his improving program.

Notre Dame loves to run the ball behind backs Kyren Williams, Chris Tyree, C’Bo Flemister and QB Ian Book, but the size of the Irish’s wide receivers Ben Skowronek (6-foot-3), Javon McKinley (6-2) and tight ends Brock Wright (6-4 ½), Tommy Tremble (6-4) and 6-5 freshman Michael Mayer could be a matchup problem for the Eagles’ secondary. BC must limit the run and pressure Book.

Notre Dame: Williams leads the team with four 100-yard games, the second most in the ACC and is fourth in the league averaging 105.7 yards per game. He’ll probably get a lot of chances early against a BC defense that’s solid but allows 143.8 yards per game on the ground.

Boston College: WR Zay Flowers is 15th in the nation with 600 yards receiving and 10th in the country with six TD catches. The speedy wideout is sometimes used on screens and jet sweeps. … Eagles’ LBs Max Richardson (first) and Isaiah McDuffie (third) are in the top three in the nation in tackles.

Notre Dame has won the last seven meetings in the series, the longest streak of either school. BC won six straight from 2001-08, with its last victory coming at home 17-0 on Nov. 8, 2008. … BC QB Phil Jurkovec, who transferred from Notre Dame in January, has thrown for 2,083 yards in his initial eight games, best start in school history. … ND coach Brian Kelly is seeking his 100th career victory with the Irish and is 6-0 lifetime against BC. … The Eagles have dropped 13 straight against top-5 teams, with their last victory 14-7 on Nov. 4, 2002 at Notre Dame in the “Green Jersey Game” when the Irish wore the jersey’s saved for marquee matchups.