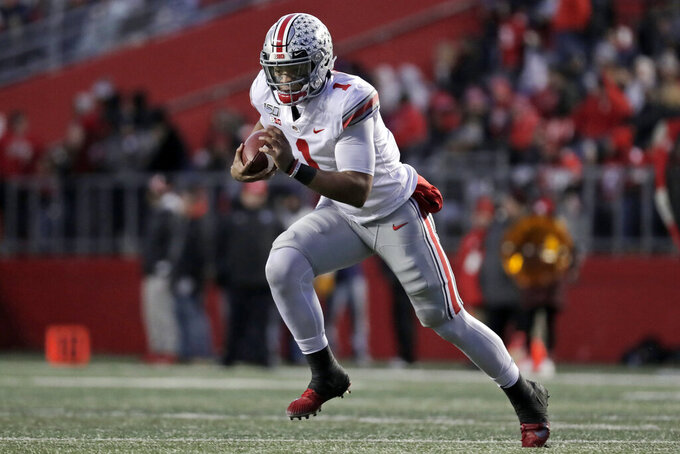 The East Division race probably comes down to this. Ohio State clinches a spot in the conference championship game Dec. 7 with a win. If Penn State wins, it would only need to beat last-place Rutgers at home next week to reach the title game for the first time since 2016. Ohio State has beaten each of its first 10 opponents by no fewer than 24 points but is playing a top-10 opponent for the first time. The Buckeyes have won two straight one-point games against Penn State, and the last three meetings have been decided by a total of five points.

The Hoosiers (7-3, 4-3) are the only Big Ten team averaging more than 300 yards passing, and Peyton Ramsey is coming off a career-high 371-yard passing day in a seven-point loss at Penn State. Indiana could be without Whop Philyor, who is second in the Big Ten with 61 catches. He was in the concussion protocol after taking two helmet-to-helmet hits on the same play last week. Cornerbacks Lavert Hill and Ambry Thomas have combined for six interceptions and 10 pass breakups for No. 12 Michigan (8-2, 5-2, No. 13 CFP).

This matches teams that haven’t won since Oct. 5. Maryland (3-7, 1-6) is averaging 246.3 rushing yards against FBS opponents with losing records, and Javon Leake is the kind of player that could torment Nebraska (4-6, 2-5). He’s averaging 7.6 yards per carry, and he’s among four players in the nation who have returned two kickoffs for touchdowns.

The Illini (6-4, 4-3) have won four straight, and the transfer from Southern California goes into the game at No. 19 Iowa (7-3, 4-3, No. 17) with nine catches for 276 yards and four touchdowns during the streak. He was a key in the 25-point comeback against Michigan State two weeks ago. He caught touchdown passes of 46 and 83 yards, and he caught a 37-yard pass to convert a fourth-and-17 on the game-winning drive.