For No. 2 Ohio St., lighter stretch starts with Northwestern 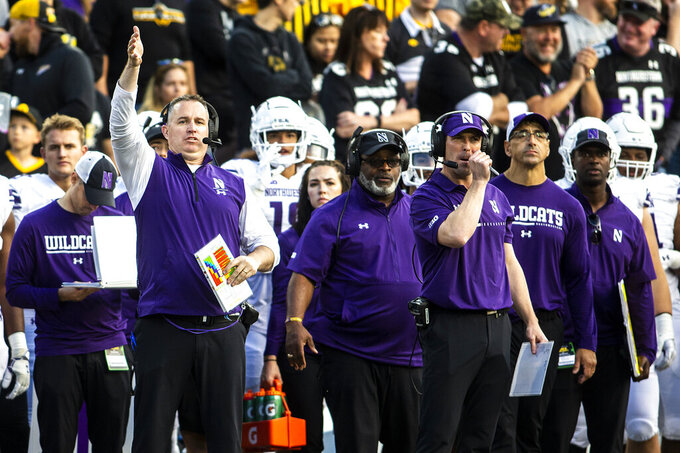 The showdown between Big Ten powerhouses in a few weeks is looming for No. 2 Ohio State. Until then, the schedule takes a lighter turn.

The Buckeyes open what looks like an easier stretch when they visit struggling Northwestern on Saturday. Then again, coach Ryan Day isn't exactly taking anything for granted.

“I think that when you have a problem or you lose a game, maybe it's something you did that week, but maybe it's something you did the weeks leading up to it," he said. “It's a Big Ten matchup, it's on the road, (coach Pat Fitzgerald) does an unbelievable job. I know maybe they don't have the record that they want to, but we've got to go play football. We want to play at a high level.”

The Buckeyes beat then-No. 13 Penn State 44-31 last week behind J.T. Tuimoloau’s strip sack and pick-6 in the fourth quarter. They were ranked No. 2 behind Tennessee in the first College Football Playoff rankings of the season. The Buckeyes and Volunteers are also tied in the AP poll with Georgia in the top spot.

Ohio State plays No. 4 Michigan in Columbus on Nov. 26. But between now and then, there are some easier games, starting with Northwestern (1-7, 1-4). The Buckeyes also host Indiana and go to Maryland before meeting the Wolverines.

Northwestern has been in a spiral since opening with a win over Nebraska in Ireland. The Wildcats, coming off a 33-13 loss at Iowa, are in their worst freefall since a seven-game skid in 2019. Northwestern hasn't dropped more than seven in a row since the 1998 team lost eight consecutive games.

WHAT’S WITH THE RUN?

Ohio State had managed just 37 yards on the ground against Penn State when the Buckeyes trailed 21-16 in the fourth quarter on Saturday.

TreVeyon Henderson finally broke away for a 41-yard touchdown with 8:51 left and added a 7-yard scoring run later to help ice it. Henderson finished with 78 yards on 16 carries after running back Miyan Williams left the game early with an injury.

The previous week against Iowa’s top-10 defense, Henderson and Williams combined for 21 carries for a season-low 57 yards.

Henderson and Williams have both missed games this season because of injuries. Ohio State averaged 229 rushing yards in the first six games; in the last two, the average was 88.5.

Williams’ arm injury isn’t considered serious, but the Buckeyes are prepping Dallan Hayden and converted linebacker Chip Trayanum to back up Henderson on Saturday, Day said.

Since losing to Ohio State in the 2020 Big Ten championship game, Northwestern is 5-16. What's happened to the Wildcats?

“We've lost games, that's what's happened,” Fitzgerald said. “You look at the why, it starts with turnover ratio. That's been a huge component to our lack of wins, and then obviously our explosive-play battle offensively and defensively, collectively. Third, making the plays that need to be made down in crunch time, especially this year.”

Former five-star recruit Tuimoloau had what Day called his “coming out party” in the win over the Nittany Lions.

A second-year defensive end from Edgewood, Washington, Tuimoloau intercepted a pass from Sean Clifford in the first half and also tipped one that defensive end Zach Harrison picked off.

After the Buckeyes took the lead in the fourth quarter, the 6-foot-4, 270-pound Tuimoloau stuck his arms in the air and picked off Clifford’s pass at the Penn State 15, trotting in for an easy TD to make it a three-score game.

“He went crazy this game,” Harrison said of Tuimoloau.

Ohio State has won nine straight and 33 of the past 34 games against Northwestern. The loss was in 2004 at Ryan Field.