No. 2 Vols visit Georgia coming off best defensive game yet 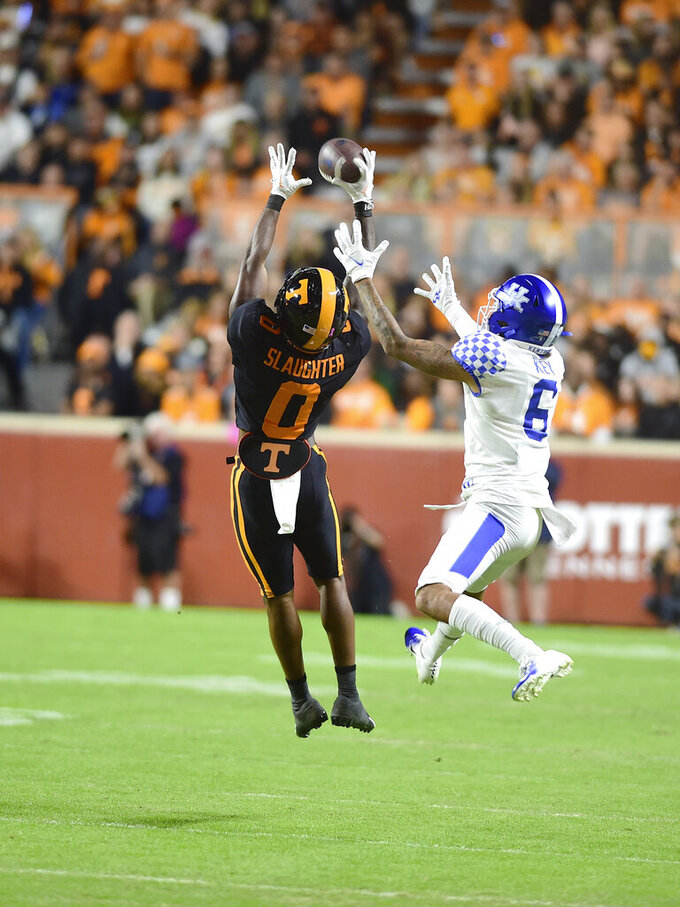 Tennessee scores so many points so fast that the defense tends to be overshadowed, ignored until someone wonders how the Volunteers can play so many minutes a game.

Turns out the second-ranked Vols actually can play some defense too, despite being on the field more than all but five other FBS teams.

As Tennessee prepares to visit defending national champ Georgia (8-0, 5-0 SEC), the Volunteers are coming off arguably their best defensive performance this season. They smothered Will Levis, a projected first-round pick in the 2023 NFL draft, allowing 98 yards passing while picking him off three times.

Coach Josh Heupel said Monday that good teams get better during a season, and he sees a defense that keeps improving thanks to coordinator Tim Banks and secondary coach Willie Martinez with last week's 44-6 rout of Kentucky the latest example.

“Last week, we were healthier than we were the week before,” Heupel said. “I feel like this week will be the healthiest that we’ve been in a while.”

The Vols (8-0, 4-0) rank first in the Southeastern Conference with a plus-8 margin in turnovers and have forced a league-best 16 turnovers.

They also are allowing just 92.9 yards rushing, which is second-stingiest in the SEC and ninth among Football Bowl Subdivision teams. They held LSU to 55 yards rushing, Alabama to 114 and Kentucky had just 107.

Worse, the Wildcats managed just 3.25 yards per play and 205 total yards against Tennessee, the fewest the Vols had allowed since Kentucky had 193 yards against them Nov. 29, 2008. The six points allowed was the fewest by an SEC opponent against the Vols since Mississippi State was routed 34-3 on Oct. 18, 2008.

Garner was in his first year coaching Georgia’s defensive line and working as recruiting coordinator when Smart was finishing up his playing career with the Bulldogs. Garner was still there when Smart was a graduate assistant. When Smart coached running backs in 2005, Garner was Georgia’s assistant head coach.

Smart said Garner brings toughness and an old school approach about hitting people and playing physically. Garner also coaches hard, something that hasn’t changed in all his years of coaching.

The secondary has been Tennessee's biggest challenge where they were so banged-up that walk-on William Wright played late in the upset of Alabama. That unit was bolstered last week by the return of four-year starting Jaylen McCollough after missing two games following his arrest for felony aggravated assault.

Attorney Chloe Akers declined to comment to The Associated Press. A motion filed in McCollough's case last week argues the safety defended himself punching someone who refused to leave after walking into an apartment in the wrong building. A preliminary hearing is scheduled for Nov. 10.

“It all works hand in hand that we all are just continuing to pull our end of the bargain and do what we have to do to get better," Thomas said.