No. 20 Arkansas looks to avoid letdown vs. Georgia Southern 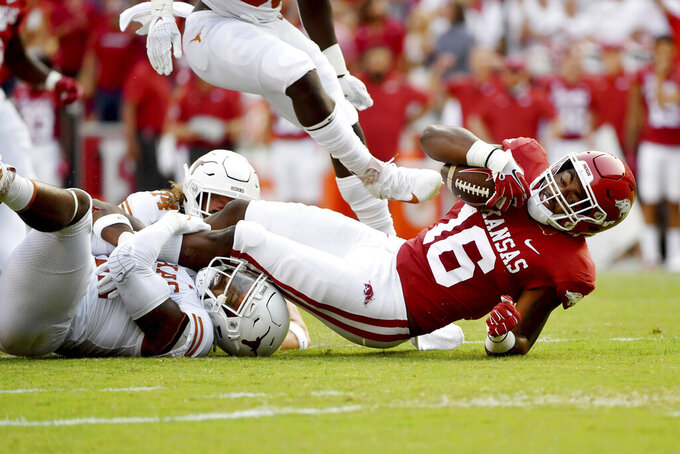 Line: Arkansas by 23 1/2, according to FanDuel Sportsbook.

Arkansas is ranked for the first time since 2016, and the Razorbacks want to build momentum after their shocking win over then-No. 15 Texas last Saturday had fans streaming onto the field. They can’t afford to look ahead to their SEC opener against Texas A&M, especially with Georgia Southern featuring that rare old-school triple-option offense.

Georgia Southern's offense vs. Arkansas' defensive front. Facing a triple-option attack is rare these days in college football, and it requires defenders to play assignment football -- focusing on specific players and being disciplined to avoid falling for sleight of hand by the quarterback. It is easier said than done.

Georgia Southern: QB Justin Tomlin. He’ll get his first career start in a hostile environment against a ranked team.

Arkansas: WR Treylon Burks. The star receiver hasn’t had a breakout game yet, but he could against a Georgia Southern defense that allows 348.5 yards passing per game. He has 10 catches for 79 yards so far this season.

Arkansas LB Hayden Henry was named the national defensive player of the week after his 15-tackle performance against Texas. ... Arkansas RB Trelon Smith has 177 yards rushing in two games. ... Georgia Southern’s Logan Wright has 206 yards rushing in two games. ... Georgia Southern is 1-13 all-time against SEC teams. The only win was a 26-20 victory over Florida to end the 2013 season. ... Arkansas will be the eighth AP-ranked FBS opponent Georgia Southern has played since moving to the FBS in 2014. The Eagles are 2-5 with two wins over Appalachian State. ___