No. 20 Hokies could be shorthanded for opener vs Wolfpack 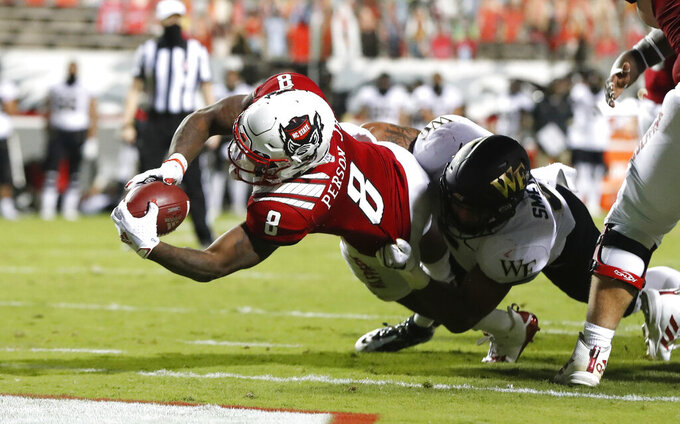 Virginia Tech finally begins a season of high expectations as the No. 20 Hokies face North Carolina State in a battle of teams that each had to postpone a game after COVID-19 outbreaks.

Hokies coach Justin Fuente, however, still has many questions about his team.

Fuente expressed concern as he started his game-week preparations knowing his players still had two more rounds of COVID-19 testing — the last will be Friday. The team will not have a full roster, he said, adding that he hopes they will be able to play.

“Ultimately I don’t know that I’ve been this close to a game and felt as uneasy about who we were going to actually have in the game as I do right now,” Fuente said.

“There is great excitement,” he said. “... I probably don’t have the same tone in my voice when you are heading into your first game. We are excited. We are anxious to play. We are tired of practicing and it’s just from the organizational standpoint of putting it all together -- it creates a little bit of angst.”

The teams were originally scheduled to play Sept. 12, but the game was pushed back by coronavirus clusters that emerged involving Wolfpack athletes and elsewhere on campus. The outbreak caused the school to temporarily pause all athletics activities, which sidelined the Wolfpack program for eight days late in preseason camp.

N.C. State (1-0, 1-0 ACC) took the field last weekend and walked away with 45-42 win against Wake Forest, ending a three-game skid in that longtime instate series. The Hokies, meanwhile, had to postpone their game with Virginia scheduled for last Saturday after an outbreak shut the Virginia Tech program down for four days.

Wolfpack coach Dave Doeren said he prepared this week like there was no question the game will be played, and he expects both teams to have a few surprises in the game plan.

Some other things to look for when N.C. State visits Virginia Tech:

Stout defense has been a hallmark of Virginia Tech football and the Hokies ranked sixth among Power Five programs last year by allowing touchdowns on just 54.8 % of opponents' red zone trips. There's plenty of experience back under new defensive coordinator Justin Hamilton.

N.C. State went with Bailey Hockman at quarterback for the opening win against Wake Forest instead of expected starter Devin Leary, who missed extensive practice time while under quarantine. Hockman will get the nod again after throwing for a TD and running for one against the Demon Deacons. “He had a laser focus throughout the week and he did a really good job prepping,” offensive guard Joe Sculthorpe said. "So when we got to the game on Saturday, he was just showing off his skill.”

Virginia Tech doesn't have as much experienced depth in its wide receiver pool after several offseason defections, but its top three of Tre Turner, Tayvion Robinson and tight end James Mitchell can all turn short gains into big plays.

N.C. State thrived in the opener with a strong ground game behind Ricky Person Jr. and Zonovan Knight, which made things easier on Hockman. Person ran for 99 yards and two touchdowns to go with a jump-pass touchdown throw. Knight ran for 97 yards and one score, part of a 270-yard output on the ground for N.C. State.

N.C. State’s defense had plenty of trouble against Wake Forest. The Demon Deacons used three second-half touchdowns to lead 42-38 with just over 9 minutes left. After the Wolfpack went back ahead, the defense got sacks on consecutive plays on Wake Forest’s final drive to force the Demon Deacons into a fourth-and-21 incompletion to seal the win. N.C, State finished with six sacks.

“The things that weren’t good are things that are correctable,” Doeren said, adding: “I thought we got better as the game went on third down, and that says a lot about their mental toughness and the conditioning aspect.”