No. 20 Iowa gets new life in Big Ten West race 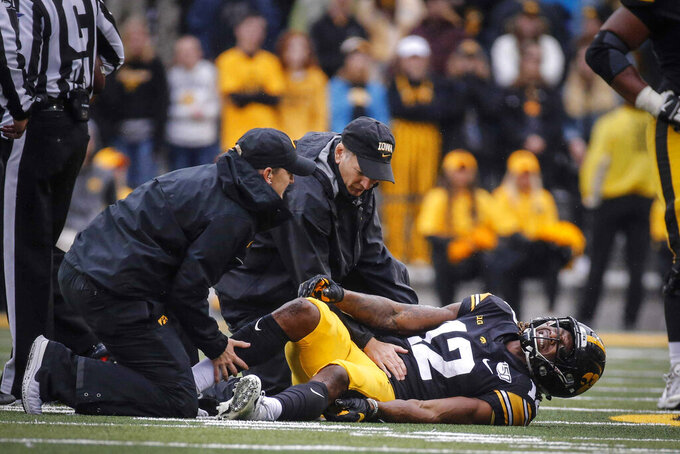 In recent weeks, Iowa hasn't looked like a team that is ready to seize such an opportunity.

Iowa now has a clear path to the Big Ten title game.

If the Hawkeyes win out — a stretch that would include a road win at No. 13 Wisconsin and a home win over the 17th-ranked Gophers — and Minnesota stumbles once more, they'll make it to Indianapolis.

Iowa will need to start playing much better, starting Saturday at Northwestern (1-5, 0-4), to even entertain the idea of reaching the championship game.

The Hawkeyes will be without receiver Brandon Smith, who coach Kirk Ferentz said Tuesday will be out 3-5 weeks with an undisclosed right leg injury.

"It reminds us that every week is important. You can't overlook any team," Iowa linebacker Djimon Colbert said of Wisconsin's defeat. "The West is open now, so we've got to come out each week and focus on that week individually. And hopefully that should lead us to Indy at the end of the road."

The Hawkeyes' defense has been impeccable through seven games, ranking fifth in scoring defense (11.6 points per game) and 10th in total defense (275 yards a game). Iowa has been consistent as well. Purdue was the first team to score 20 on the Hawkeyes.

Iowa's offense has been all over the map though and losing Smith won't help matters.

Smith, Iowa's leading receiver with 33 catches for 407 yards and four touchdowns, tumbled to the turf after catching his career-high ninth pass against Purdue.

Smith had to be helped off the field by linemen Tristan Wirfs and Alaric Jackson, and he hobbled to the locker room on crutches.

"It's taking one of better threats off the field," Ferentz said. "You just make adjustments and keep playing."

The Hawkeyes running attack struggled again against the Boilermakers, rushing for just 102 yards on 33 tries. But junior back Mekhi Sargent did provide a glimmer of hope late in the fourth quarter.

Nursing a six-point lead, Sargent reeled off runs of 21 and 14 yards on back-to-back plays for the game-winning touchdown.

"It's a 60 minute game. You've got to bring your horses the whole time," Sargent said. "We just wanted to finish strong."

If Iowa can find more consistency on offense, a season-ending winning streak is possible.

The Hawkeyes beat No. 23 Iowa State on the road and its losses, to No. 6 Michigan and No. 19 Penn State, came by just 12 combined points.

Iowa also has three road games left, but its defense should give it a chance away from Iowa City.