No. 20 K-State ready for Kansas in annual Sunflower Showdown 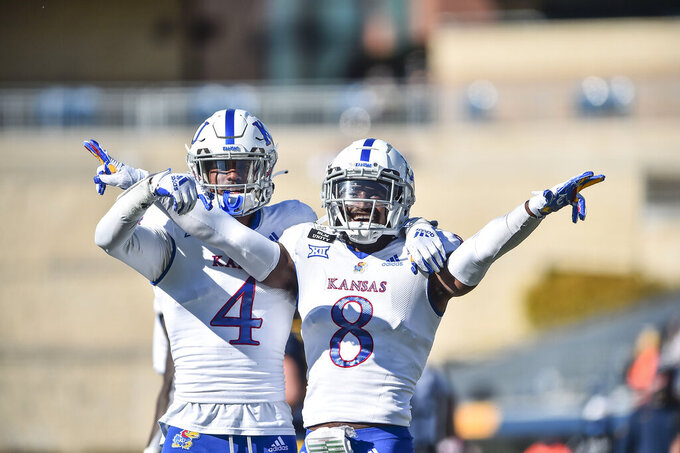 After all, the Wildcats are playing without quarterback Skylar Thompson the rest of the way.

The circumstances are different, of course. Thompson hurt his throwing shoulder against Texas Tech a couple of weeks ago. But the result is the same: The Wildcats and Jayhawks both face the back half of the season without two of the most important players on their teams, let alone their offenses.

“Chalk it up to 2020, you know?” Klieman said. “I hope his family is doing well — I know that was one of the reasons. Often times it galvanizes a football team when somebody leaves. We didn't have Skylar for TCU and I think our team really came together. Kansas is going to show up and play no matter what and they're going to give us their best effort.”

Freshman quarterback Will Howard, no doubt the future of the program at quarterback, led them the rest of the way to a win over the Red Raiders. He then ripped off a tone-setting run and did just enough in the passing game to help Kansas State to a win over the Horned Frogs. And with a well-timed bye last week, Howard has now spent a few weeks in the No. 1 job, gaining some measure of comfort in leading a team in the hunt for a conference championship.

“Just his control of the offense has improved a lot,” Kansas State running back Harry Trotter said. “Will coming in was already a confident kid. You could tell he had a little swagger to him. I'm just trying to help him with the little things, the timing and pre-snap stuff, but he's just evolved a lot."

The Jayhawks (0-4, 0-3) insist they have the same level of confidence in their quarterback — whomever it may be.

Thomas MacVittie could be ready to play after hurting his shoulder a few weeks ago. So could freshman Jalon Daniels, whose bright start to his career was sidelined by an injury of his own. If nothing else, Miles Kendrick is at least healthy after he played in last week's loss at West Virginia.

“We are nicked up at that position, no question,” said Miles, who plans to be back on the sideline after missing the trip to Morgantown following his COVID-19 diagnosis. “Whoever it is, we have to execute.”

Kansas State has won 11 consecutive games in the series, tied for the longest streak by either team, and that begs the question: Is it even a rivalry? Well, to the kids who grew up in the state, there is no bigger game regardless of the records.

“All the Kansas players we have, a lot of us take it personal that we weren't part of their recruiting,” said Wildcats defensive back Jahron McPherson, who grew up in Basehor. “Some people grew up KU fans and that kind of hits home when your in-state team doesn't recruit you.”

Miles said he had relatively mild symptoms from COVID-19. He was cleared to return to the team for the Mountaineers but chose to remain home out of an abundance of caution. Miles said he paced throughout the game, making copious notes as it progressed, but that nothing replaces being on the sideline.

“This season we're not through with,” he said. “A quality win against an opponent of significance puts you in a position that you really enjoy going to work, and as long as you win, you have the opportunity to enjoy that next week.”

Both programs have plenty of first-year players pressed into service. The starting QBs are freshmen if Howard and Daniels play as expected, and the Wildcats have two more freshman starters in right tackle Cooper Beebe and running back Deuce Vaughn. The Jayhawks have two freshman starters on defense in Steven Parker and cornerback Karon Prunty, along with a pair of backup wide receivers and three freshman on the two-deep on both the D-line and the defensive backfield.

The Wildcats hope to get Malik Knowles more involved this week. The sophomore wide receiver had 27 catches for 397 yards and three scores last season, but he has just two catches for 34 yards while dealing with injuries this season.

Miles should know something about rivalries. He's been in some of the best: Michigan-Ohio State as a Wolverines assistant; the Bedlam game between Oklahoma State and Oklahoma as the head coach of the Cowboys; and LSU-Auburn, when he was leading the Tigers against coach Nick Saban and the Crimson Tide.

“They know us and we know them,” Miles said, “and this is just a rivalry where we can look in the backyard and see the guy you're playing against. That's a tremendously important piece of this game.”