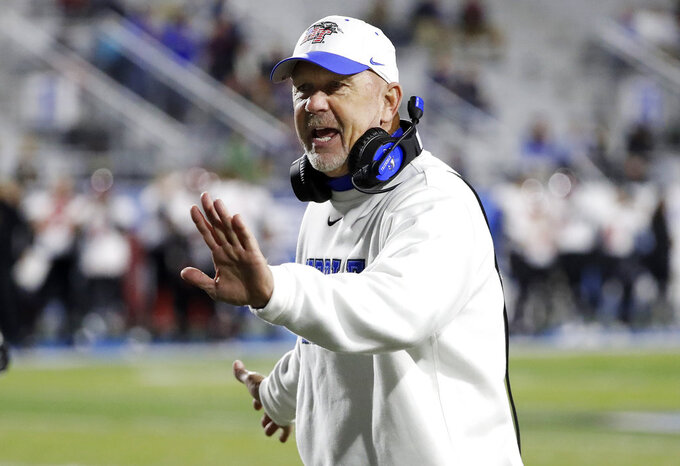 Middle Tennessee head coach Rick Stockstill congratulates his players after a touchdown against Western Kentucky in the first half of an NCAA college football game Friday, Nov. 2, 2018, in Murfreesboro, Tenn. (AP Photo/Mark Humphrey)

The No. 20 Wildcats (7-3) have been outscored 58-24 in consecutive losses to No. 5 Georgia and Tennessee that wrapped up Southeastern Conference play. Kentucky hopes to get back on track in Saturday's home finale against Middle Tennessee (7-3), which will mean scoring more than the 17 points that seems to be its recent ceiling.

That output probably won't suffice against a Blue Raiders squad averaging 37 points during their four-game winning streak. While coach Mark Stoops has dismissed suggestions about an offensive overhaul, he acknowledges that something has to give. Coordinator Eddie Gran believes the answer is simply reclaiming the aggression and focus that built a 7-1 start.

"We've got to play harder, we've got to be more consistent," Gran said this week. "That's the thing, getting back to that physicality of not talking about it, but doing it."

Kentucky's defense also needs a reboot after falling from its perch two weeks ago atop several national categories.

The Wildcats have allowed 61 points over that span and been vulnerable to chunk plays. Fatigue has also shown on a unit that has worked hard to provide the offense opportunities and field position.

Stoops believes everything is fixable and has reminded Kentucky of what it can achieve if it succeeds. Beating MTSU would give the Wildcats eight wins for the first time since 2007, and nine is still possible if they stay the course.

"We did a lot of good things to win seven games," Stoops said, "and we plan on trying to get to eight and nine."

The Blue Raiders were at a similar crossroads a month ago before finding the formula that has them chasing their first five-game winning streak since 2013. Conference USA's East Division leaders now aim for a signature win against a SEC school before next week's league showdown against West-leading Alabama-Birmingham.

MTSU coach Rick Stockstill acknowledges that won't be easy against a Wildcats defense allowing 321.8 yards per game. Let alone a team hungry to get back in the win column.

"When you play teams like this there isn't much margin for error," he said. "We have to make sure we play well in all three phases of the game."

Other things to watch in Kentucky's home finale against MTSU:

Kentucky will honor 16 seniors on Saturday, a group that includes linebackers Josh Allen and Jordan Jones and tight end C.J. Conrad. The class has helped reverse the program's culture and fortunes to win 26 games and earn consecutive bowl berths, and they hope to win in their third postseason appearance. "We decided in coming here that we could do something special, and we feel like it has been special," Allen said. "Just to get to the point we are is amazing, and the growth we've made and the progress we're making is unbelievable."

Senior quarterback Brent Stockstill holds every MTSU passing record and is coming off a 352-yard performance last week against UTEP, the 17th of his career. His four touchdown passes in that contest gave him 21 this season and 98 in his career, putting him on the brink of becoming the NCAA's 25th FBS player with 100 TDs.

ONE MORE FOR THE RECORD

Allen leads the SEC with 11 sacks, 15.5 tackles for loss and five forced fumbles. He can tie Dennis Johnson's single season school record set in 2001 with his next full sack and break Oliver Barnett's career mark of 26 from 1986-89.

Ten turnovers and a plus-8 margin the past four games have keyed MTSU's impressive stretch run. The Blue Raiders have scored 50 points off those takeaways and yielded only eight. "We worked very hard at it last year but the ball didn't bounce our way," Rick Stockstill said, lamenting dropped interception chances and a failure to recover fumbles. "This year, we're taking advantage of them. We're finishing plays better this year than we did last year."