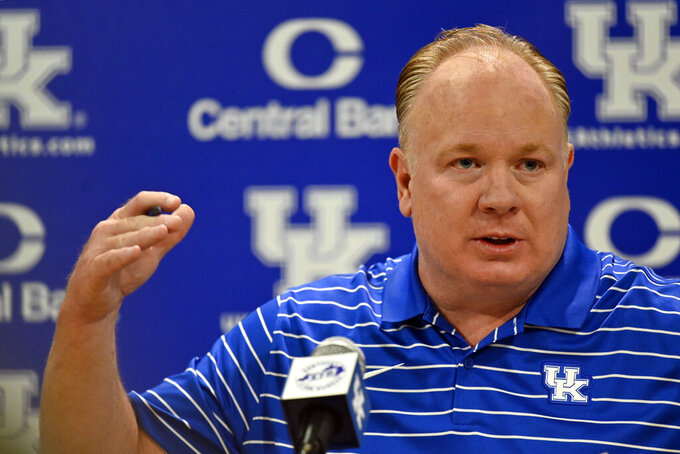 LEXINGTON, Ky. (AP) — Kentucky’s second 10-win finish in four years is an indication of how Mark Stoops has transformed the once-moribund program he took over 10 seasons ago.

Success has raised expectations for the No. 20 Wildcats, who begin with their first preseason ranking since 1978 and media predictions of finishing second to defending national champion and No. 3 Georgia in the Southeastern Conference’s East Division.

Stoops appreciates the recognition, but wants Kentucky to tune out the noise and focus on improvement to maintain the respect it has worked so long to earn.

“I am proud of that, and I appreciate the work,” said Stoops, who needs two wins to surpass legend Paul “Bear” Bryant (60) as Kentucky’s winningest coach. Bryant went on to win six national titles at Alabama after leaving Lexington.

Stoops certainly has elevated his defense when it comes to defending his rising program.

He quickly snapped back on social media to a recent comment by Wildcats men's basketball coach John Calipari saying that Kentucky was a “basketball school” as he pitched for an upgraded hoop practice facility. Calipari eventually apologized, two days after Stoops tweeted a reminder that the school is part of the football-dominant SEC with the hashtag “#4straightpostseasonwins.”

Now Stoops' Wildcats intend on becoming part of the championship discussion like Kentucky's men's hoop team routinely is in.

The Wildcats (10-3, 5-3 SEC last season) return 13 starters — including six from the SEC’s fourth-ranked defense — after winning the Citrus Bowl and finishing No. 18 in the rankings. They remained busy with the transfer portal, landing 10 new players.

Senior quarterback Will Levis directed that 20-17 comeback over Iowa in Florida and returns with under a bigger microscope on and off the field after a breakout season. He has already developed a relationship with new offensive coordinator/quarterbacks coach Rich Scangerello, who will maintain the pro-style scheme, and looks to take a potent offense a step further.

Scangerello “sees me take reps in practice and understands how my brain works,” said Levis, who’s projected as a possible top-10 selection in next year’s NFL draft.

Other things to watch in Stoops’ 10th season with the Wildcats:

Levis passed for 2,827 of his 3,203 yards from scrimmage and 24 of his 33 TDs. Building on those impressive numbers requires bonding with a huge receiver corps and filling the big-play void left by record-setting wideout Wan’Dale Robinson (104 catches, 1,334 yards), who was drafted by the New York Giants. That group includes transfers Tayvion Robinson (1,555 career yards at Virginia Tech) and Dee Beckwith (Tennessee).

Stoops won’t comment the availability of leading rusher Chris Rodriguez Jr., who pleaded guilty in Lexington this summer to driving under the influence. He’s coming off his own breakout junior season in which he ran for a career-best 1,379 yards and scored eight touchdowns, earning first team All-SEC honors. Kentucky has senior Kavosiey Smoke (416 yards, four TDs) and juniors Mike Drennen and JuTahn McClain back to handle duties if Rodriguez is disciplined. The program also added Sam Houston State transfer Ramon Jefferson, who rushed for 1,907 yards in 22 games the past two seasons.

Kentucky has eight home games this season, providing a good opportunity to match last year’s win total. The Wildcats open Sept. 3 against Miami (Ohio) in the first of three non-conference home contests sandwiched around a SEC East showdown at Florida in Week 2. Georgia visits on Nov. 19 to wrap up league play, followed by in-state rival Louisville following the next week. Kentucky has dominated the past three series meetings by a 153-44 margin.