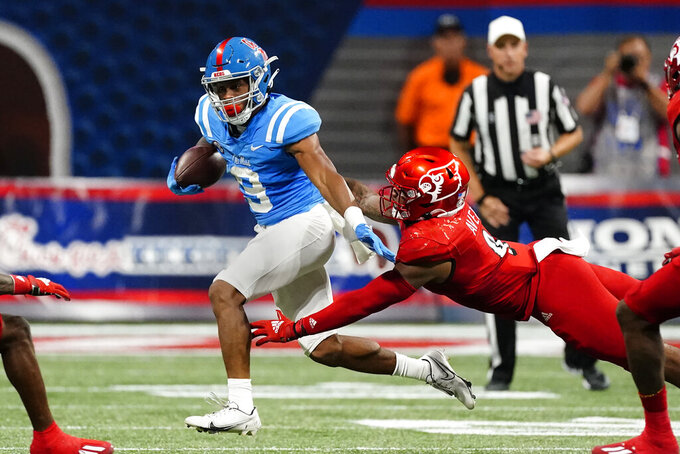 Mississippi running back Jerrion Ealy (9) tries to escape from Louisville linebacker C.J. Avery (9) during the first half of an NCAA college football game Monday, Sept. 6, 2021, in Atlanta. (AP Photo/John Bazemore)

The Rebels want to keep the good feelings going after a performance against Louisville that launched them into the Top 25. Austin Peay, a ranked FCS team, is coming off a 30-20 win over Chattanooga and would love to pick up an even bigger win.

Mississippi QB Matt Corral, tailback Jerrion Ealy and the Rebels' explosive offense faces a defense that held Chattanooga to 228 yards of total offense. Jack McDonald has 188 tackles over the past two seasons for Austin Peay, third-most among FCS defenders in that span.

Austin Peay: QB Draylen Ellis passed for 326 yards and four touchdowns, with a pair of interceptions, in the opener. He's the preseason quarterback of the year in the Ohio Valley Conference.

Mississippi: WR Dontario Drummond is coming off a career game against Louisville. He had nine catches for 177 yards and caught a touchdown pass for the fifth straight game. The 177 yards was a yardage high so far in the FBS.

Ole Miss has won eight of its last nine home openers. The Rebels have lost only one home non-conference game since 2012, falling to No. 23 California 28-20 on Sept. 23, 2019. ... Austin Peay's Scotty Walden, 30, is the youngest head coach in Division I. The Rebels' Lane Kiffin was the youngest head coach in the NFL's modern era, taking over the Oakland Raiders at 31. ... Corral's 5,319 career passing yards is just 75 shy of Jevan Snead for No. 7 on the Ole Miss career list. Corral led the nation in total offense last season and his 436 yards was second-best on opening weekend.