No. 20 Mississippi, Miss. State face off in Egg Bowl rivalry 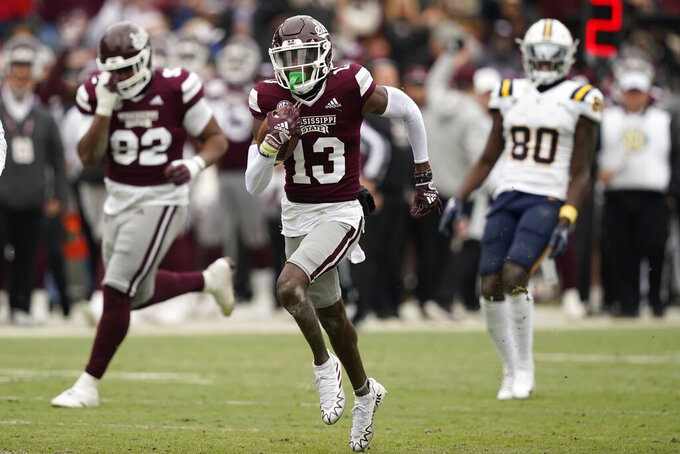 Mississippi State got back on track after losing three of four with a 56-7 rout of East Tennessee State. The Bulldogs seek their first Egg Bowl win since 2019 and to reach eight wins for the first time in four years. Ole Miss's longshot playoff hopes were dashed with losses in three of the last four games. But the Rebels can keep their hopes of a second straight 10-win season alive with a victory.

Which offensive style will be more effective? Ole Miss runs the ball 63.4% of the time while the Bulldogs have passed on 70% of their plays. Both offenses rank in the top 10 nationally in their respective strengths. Ole Miss has the No. 3 running team at 278.7 yards a game. Mississippi State is ninth in passing yards per game (321.2).

Mississippi State: QB Will Rogers. The Bulldogs junior continued to pile up records as he moved past Ole Miss’ Eli Manning for ninth place all-time in SEC passing (10,189 yards) following his 301-yard, five-touchdown performance against ETSU. The conference's career leader in completions (1,103) averages a league-best 315.8 yards per game and has tossed 32 TDs with just five interceptions.

Mississippi: RB Quinshon Judkins is the SEC's top rusher with 1,385 yards and 16 rushing touchdowns. Both are Ole Miss single-season records. Judkins and Zach Evans both topped 200 yards against Arkansas.

It’s the 95th “Battle of the Golden Egg,” with the two schools playing for the trophy since 1927. The two teams have split the last 30 meetings, 15-all. .. MSU cornerback Emmanuel Forbes posted his third interception return for a touchdown this season against ETSU to set the FBS career mark with six. ... Ole Miss is the only FBS team that has tallied more than 5,000 yards of total offense and 2,500 rushing yards. ... The Rebels lead the SEC and rank No. 2 in the FBS with 78 plays of 20 yards or more. ... Ben Williams, the first Black player to appear in a varsity football game for Ole Miss, will have his No. 74 jersey number retired.