No. 20 Pitt can wrap up Coastal with win over Virginia 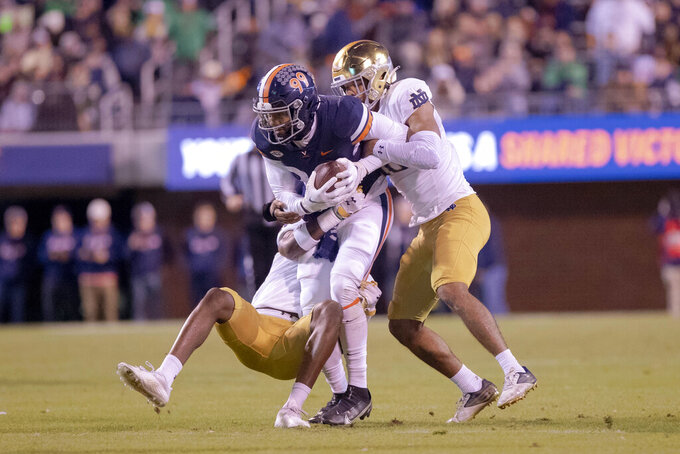 Line: Pittsburgh by 14 1/2, according to FanDuel Sportsbook.

The Panthers can clinch their second ACC Coastal Division title in four years with a win in their home finale. The Cavaliers can claim the division with a victory at Heinz Field and then another next week at home against archrival Virginia Tech.

Virginia's offensive line against Pitt's pass rush. The Cavaliers have given up an average of 3.30 sacks per game, tied for the 12th-most in the country. If banged-up starting QB Brennan Armstrong plays, Virginia's best chance at the upset is keeping the Panthers from targeting Armstrong's aching ribs. Pitt's 3.6 sacks per game rank third nationally.

Virginia: Keytaon Thompson. He's listed simply as a football player on Virginia's depth chart and is second on the Cavaliers with 60 receptions. Most of those have come with a cast on his left hand, and many have come in key spots. If Billy Kemp (63 catches) can't play, Thompson figures to become a bigger factor.

Pitt: QB Kenny Pickett has spent his super senior year re-writing the school record book. He's can add another marker to his ever-growing list with 163 yards passing against the Cavaliers, which would break the single-season record (3,679) set by Rod Rutherford in 2003. Pickett's 32 touchdown passes rank fourth nationally and second among Power Five conference teams.

The Panthers have dominated the Cavaliers of late, taking four of the last five meetings. Virginia's lone win during that stretch was a 30-14 victory in the 2019 season opener, the only time the Cavaliers have won in Pittsburgh (1-5). ... Pitt is second in the nation in total offense (531.1 yards) and fourth in scoring (43.5 points per game). ... Pitt WR Jordan Addison's 11 touchdown receptions are tied for tops in the nation and are the most by a Panther since Larry Fitzgerald caught 22 touchdowns in 2003. ... The game will be the final Heinz Field appearance for Pickett as well as wide receiver Tre Tipton, who is one of eight players nationally competing in a seventh season at the same school. ... Armstrong leads the nation in total offense, averaging 425.4 yards. ... Virginia averages just 138 rushing yards per game while allowing 222 per game.