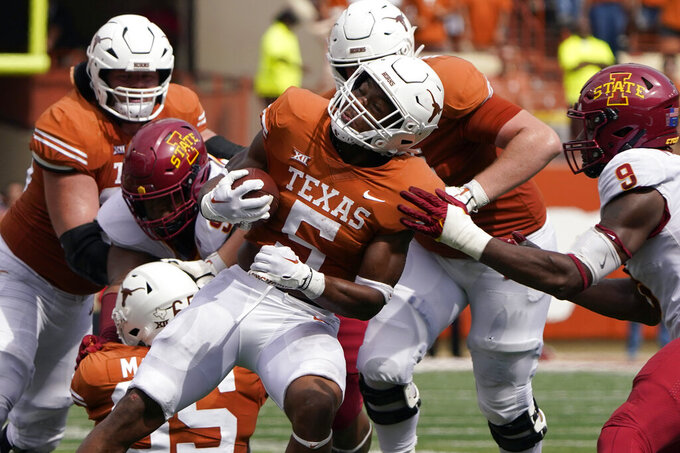 Last week's game showed why he feels that way. Texas rallied to beat a tough Iowa State team and remain well positioned in the Big 12 race.

After taking that positive step, the Longhorns could find themselves in another tight one this Saturday when the 20th-ranked Longhorns (5-2, 3-1 Big 12) visit No. 11 Oklahoma State (5-1, 2-1). The game is critical in the conference race, with both teams trying to keep up with TCU and Kansas State, which both are unbeaten in league play.

Oddsmakers are buying into Sarkisian and the Longhorns. According to FanDuel Sportsbook, they are favored despite playing on the road against a higher-ranked opponent.

The home crowd helped Texas last week, but the Longhorns will be in a hostile, notoriously loud environment on Oklahoma State's homecoming weekend.

“I think poise and composure are really important on the road,” he said, “And when adversity strikes on the road, that doesn’t have to mean it’s adversity for the next quarter, it can be for that one play, and then you’ve got to have the ability to move on to the next.”

One reason the Longhorns have been competitive is their defense. Linebacker Jaylan Ford leads a unit that allows just 18.3 points per game. He leads the Big 12 in tackles. His acrobatic end zone interception and a late fumble recovery rescued the Longhorns against Iowa State.

Oklahoma State coach Mike Gundy is impressed with the Texas defense and notes that the Longhorns are more aggressive than in years past.

The Longhorns will face an Oklahoma State offense that ranks fourth nationally in scoring with 45.3 points per game. Quarterback Spencer Sanders averages 324.7 yards of total offense per game, good for 11th nationally and tops in the Big 12. He has completed fewer than 50% of his passes the past two games, but has rushed for 124 yards and four touchdowns during that span.

Oklahoma State also is coming off a 3-point game, a 43-40 double-overtime loss to TCU. Gundy said the Cowboys were a little better in that game than he originally thought.

“When I watched the tape, overall, I felt much better — if there’s any way to feel better after you come up short -– with the way our guys played,” he said.

Dominic Richardson has gotten most of the rushes for Oklahoma State this season, but Gundy said Jaden Nixon and Ollie Gordon will get more carries.

It's nothing against Richardson. Gundy just wants to keep Richardson healthy and he believes the others have earned more carries. Richardson already has 108 carries in six games. Gordon has 16 carries and Nixon has 14.

Still, Oklahoma State will have to run the ball better against Texas. Gundy felt Oklahoma State’s lack of balance was costly in the loss to TCU last week. The Cowboys gained just 141 yards on 41 attempts last week.

Texas running back Bijan Robinson leads Big 12 players with 111.4 yards rushing per game. He ran for 135 yards and two touchdowns in last year’s meeting with the Cowboys. In his past five games, he has 651 yards and eight touchdowns rushing and 10 catches for 118 yards.

Texas running back Roschon Johnson may be the most versatile and valuable player on the team.

The converted quarterback averages 5.3 yards per carry as a rusher when spelling Robinson, 10.3 yards per reception and has run the offense from the wildcat formation taking direct snaps.

He even has four tackles on special teams, including a bone-rattling hit on a kickoff return against Iowa State.

Johnson said he’d even volunteer to play linebacker: “I’m serious. I would if they want me to.”

Now, the Cowboys face another dangerous receiver in Xavier Worthy. Last week, Worthy snagged eight passes for 72 yards and two touchdowns, including the go-ahead score in the win over Iowa State. For the season, the sophomore has 32 catches for 432 yards and six scores.