No. 20 Virginia looks to add to Miami's bleak start 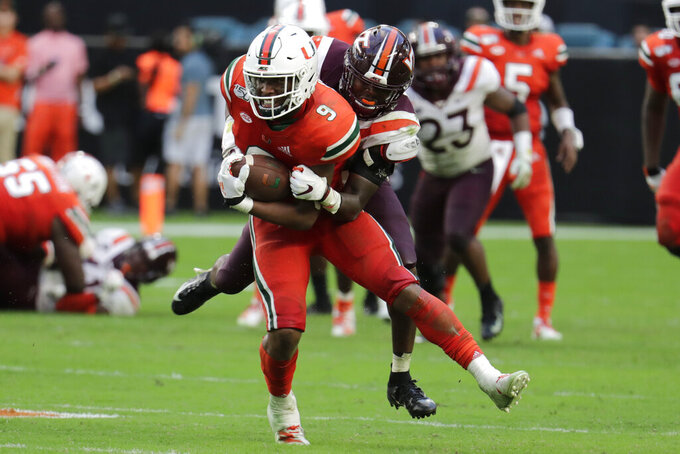 Miami has never been 0-3 in conference play — counting both its Big East and ACC tenures — while Virginia is seeking its first 3-0 conference start since 2007. A win keeps the Cavaliers in control of the Coastal Division race, and a loss would see Miami matching its worst six-game start from any of the last 44 seasons.

Virginia's defensive line vs. Miami's offensive line. Put simply, this could be a disaster for Miami. Virginia is sixth nationally with 24 sacks — and Miami enters having allowed 25 sacks, the most of the 130 teams at the FBS level. The Hurricanes are the nation's only team to allow at least seven sacks in multiple games this season, and two of the five games in school history where it gave up at least seven sacks have come so far in 2019.

Virginia: QB Bryce Perkins has appeared in 18 games for the Cavaliers. He has a touchdown pass in 17 of them — last year's win over Miami being the exception.

Miami: TE Brevin Jordan is coming off a career-high 136 receiving yards against Virginia Tech, and figures to be a huge part of the game plan this week.

The Cavaliers and Hurricanes are almost identical in many stat categories, such as points for (Virginia 161, Miami 160), points allowed (Virginia 107, Miami 106), completion percentage (Miami 68.1, Virginia 67.8), yards per game allowed (Virginia 275.4, Miami 283) and average time of possession (Virginia 33:47, Miami 33:08). ... The only other time a ranked Virginia team played at Miami was in 2007 — the Cavaliers' 48-0 win in the Hurricanes' last game at the Orange Bowl. ... Virginia could match its best six-game start since going 6-0 to begin 1990. ... Miami LB Shaquille Quarterman is expected to start his 45th consecutive game, tying Dan Morgan's school record at that position. ... The Hurricanes threw 55 passes last week, second-most in school history.