No. 20 Washington humbled by stunning loss to Montana 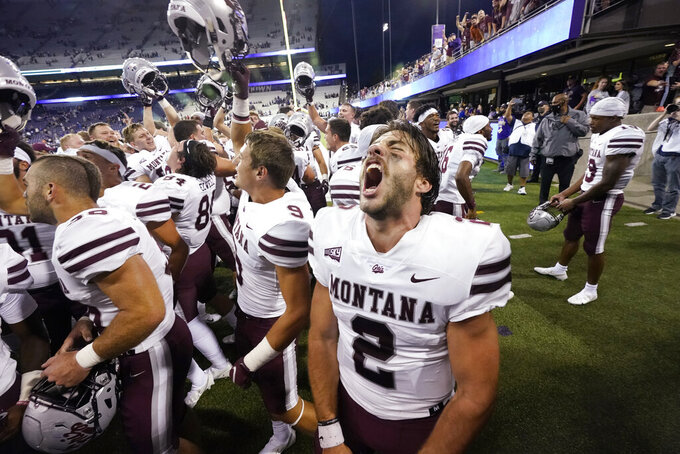 Montana quarterback Cam Humphrey lets out a yell as he celebrates with teammates after they beat Washington in an NCAA college football game Saturday, Sept. 4, 2021, in Seattle. Montana won 13-7. (AP Photo/Elaine Thompson)

SEATTLE (AP) — Jimmy Lake was apologetic, his words a mixture of disappointment and resolve.

It was the tone Washington’s coach had to take after arguably the worst, most embarrassing loss in the history of the Huskies football program.

“We should not have played the way we played on Saturday night and that’s why I feel so bad for our fans, for our supporters,” Lake said on Monday. “They should be disappointed. They should be pissed, just like we are. All we can do now is move forward here and make amends. And that’s what we’re trying to do.”

Lake’s words won’t take away the sting of Saturday’s 13-7 home loss to Montana when the Huskies — ranked No. 20 — became the fifth ranked FBS team to lose to a FCS team since 2007.

It was a stunning, unexpected stumble by the Huskies. A team expected to compete for a Pac-12 title and considered a darkhorse for a College Football Playoff run was bullied on its home field by a lower division opponent and held to its lowest point total at home in 11 years.

The trouble for Washington is it could get worse. The warmup against Montana was supposed to be the easy appetizer to this week’s showdown at Michigan. And if Lake can’t regroup in a hurry, Washington could be looking at its first 0-2 start since the infamous 2008 season when it went 0-12.

“We’ve got to be better prepared, we’ve got to have a better plan and we did not execute a good plan,” Lake said. “It all starts with coaching first, and it starts with me.”

Washington’s history is speckled with bad, unthinkable losses. There was the 10-7 loss in 1973 to Hawaii, reportedly as a 50-point favorite. A 1985 loss at home to Oregon State as a 38-point favorite was long considered the worst upset for Washington.

In 2006, then-coach Tyrone Willingham told a group of fourth-year juniors they wouldn’t be invited back for their senior season. The “suddenly senior” game led to a 20-3 loss to winless Stanford as a 19-point favorite and cost the Huskies a bowl game.

All that makes the loss to Montana that much more shocking. These Huskies, with NFL talent across the roster, were outcoached, outmaneuvered and outplayed.

What might be most disheartening was Washington’s inability to use its superior talent to impose itself on Montana. Washington was regarded as having one of the top offensive lines in the country, yet failed to bully Montana’s defensive front. Huskies quarterback Dylan Morris was sacked once in four games last season; he was sacked three times by the Grizzlies. Take away the sack numbers, Washington rushed for 90 yards on 24 carries, a mere 3.8 yards per carry.

Morris also threw three interceptions, the last coming with 31 seconds left. It was one of the few downfield shots taken by Morris, in part due to a limited group of receivers.

Washington played without its top three wide receivers and lost No. 4 receiver Ja’Lynn Polk to a chest injury on the first play of the game that Lake said required emergency surgery afterward. Lake declined to discuss the specifics of Polk’s injury. He said he is recovering well but will not be available until the postseason at the earliest.

As for Washington’s other receivers —Jalen McMillan, Rome Odunze and Terrell Bynum — Lake said all of them are week-to-week. Their unavailability against Montana left the Huskies with just four scholarship wide receivers.

“We’ve got to make even further adjustments now knowing the issue that we have with the injury updates,” Lake said. “So that’s what we’re going to have to do. We’re going to have to build a plan to make sure that we can still go out there and operate, put points on the board and try to get a victory.”