No. 20 Washington welcomes back fans versus Montana 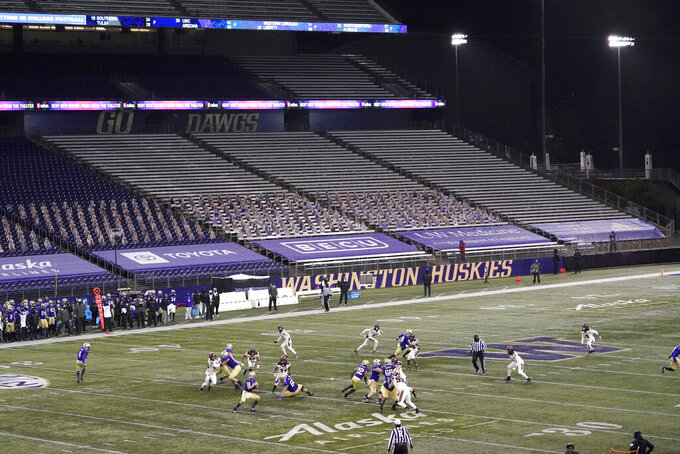 FILE - In this Nov. 14, 2020, file photo, Washington quarterback Dylan Morris drops to pass against Oregon State in front of empty seats at Husky Stadium during the second half of an NCAA college football game in Seattle. Washington begins the 2021 season as one of the favorites in the Pac-12 North Division, while also trying to erase the bad taste of how last year ended when a COVID-19 outbreak brought a sudden end to an already truncated schedule. (AP Photo/Ted S. Warren, File)

Line: no line, according to FanDuel Sportsbook.

After playing just four games and missing out on the Pac-12 championship game a season ago, No. 20 Washington gets a season of high expectations started and welcomes back fans to Husky Stadium against FCS powerhouse Montana. It’s a warmup for the Huskies ahead of next week’s showdown at Michigan, one of the most high-profile non-conference games for the Pac-12. For the Grizzlies, the trip to Seattle is a big pay day and a chance to get on the field after playing just two games during the spring of 2021.

Washington’s defensive front vs. Montana’s offensive line. As is usually the case in matchups between FBS and FCS teams, depth and talent up front usually make the biggest difference. Washington’s defensive front has the chance of being very good but is also unproven at a couple of positions. Montana’s offensive line features three redshirt senior starters along with Washington State transfer Hunter Mayginnes. That group must be very good if the Grizzlies want to keep it close.

Montana: QB Cam Humphrey. The senior started his career at Boise State before ending up in Missoula. He’ll begin the season about 20 miles from where he played high school football. Humphrey saw limited snaps in 2019, but threw for five touchdowns in Montana’s two games last spring.

Washington: WRs Rome Odunze, Terrell Bynum and Ja’lynn Polk. The only position group with questions on the offensive side for Washington is its wide receivers. Odunze and Bynum combined for just 14 catches last season, while Polk — a transfer from Texas Tech — had 28 grabs and two touchdowns. If this group develops, the Huskies offense could be extremely potent.