No. 21 Aztecs, Bulldogs face off for supremacy in rivalry 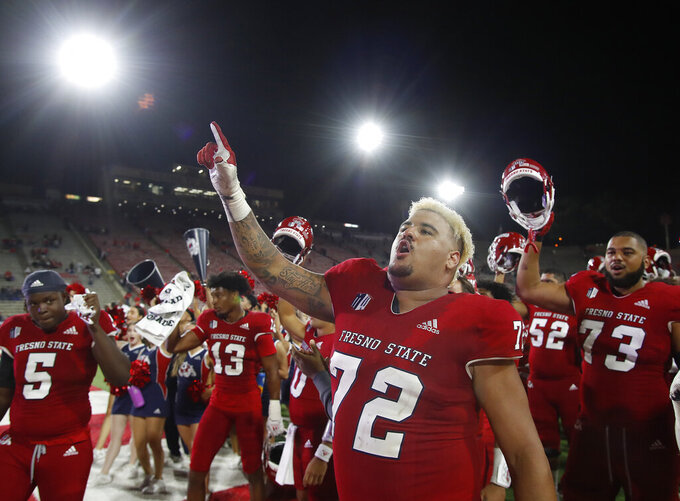 SAN DIEGO (AP) — Bragging rights as the best college football team in California will be decided Saturday night in a Mountain West Conference game at a soccer pitch in an industrial suburb of Los Angeles.

No. 21 San Diego State (7-0, 3-0), a defensive-minded team whose best player is punter/placekicker Matt Araiza, will host Fresno State (6-2, 3-1), one of the top-scoring teams in the country, in a pivotal matchup in the MWC’s West Division.

There's a lot at stake for the Aztecs, who are playing a second season at Dignity Health Sports Park in Carson, the home of the Los Angeles Galaxy of the MLS, while 35,000-seat Aztec Stadium is being built in San Diego.

SDSU is looking for its first 8-0 start since 1975 and to keep a grip on the West Division lead. The Aztecs also look to hold on to the Old Oil Can against their biggest in-state rival.

“I think it will be a very, very tough game and as long as we’re more prepared, I think we’ll be fine,” SDSU tight end Daniel Bellinger said. “It’s definitely going to be a chippy, chippy battle in the trenches. It’s going be a chippy battle on the field. They’re going to have some words to say to us and we’re just going to have to go out there to play.”

Both teams have made noise against the Pac-12 this season. SDSU beat Arizona and Utah, and Jake Haener and the Bulldogs stunned then-No. 13 UCLA 40-37 at the Rose Bowl on Sept. 18.

Araiza, a junior from San Diego’s Rancho Bernardo High, continues to lead the nation and is on pace to break the FBS record for punt average. He leads the nation in punt average at 54 yards, has 28 punts that have traveled at least 50 yards and 22 punts downed inside the 20-yard line. He was named MWC Special Teams Player of the Week for the second straight week and third time this season by averaging 54.8 yards per punt, with a 50.8 net punt average, with a long of 81 yards, as well as two field goals in a 20-14 win at Air Force. His five kickoffs all went for touchbacks.

SDSU currently holds the Old Oil Can trophy by virtue of beating Fresno State 17-7 in their last meeting, in 2019. Although the series dates to 1923, the Old Oil Can was awarded to the winner starting in 2011. An old oil can from Fresno supposedly was recovered during a construction project on the SDSU campus. It likely is a relic from the era when fans of the two teams traveled on the old, dangerous Grapevine section of Highway 99 over Tejon Pass.

Haener has thrown for 2,582 yards and 22 touchdowns, with six interceptions. He threw for 256 yards and two touchdowns in a 34-32 win against Nevada last week in a showdown between the two highest-scoring teams in the MWC.

Asked if he’s a big style points guy, SDSU coach Brady Hoke said, “No. Here’s the style. The style is to win and that’s it. We’re not real flashy but the one thing we do have is the way we are playing together and complementing each other. We’ve got a formula to try and win every game.”