No. 21 Illinois hosts Purdue with division title on the line 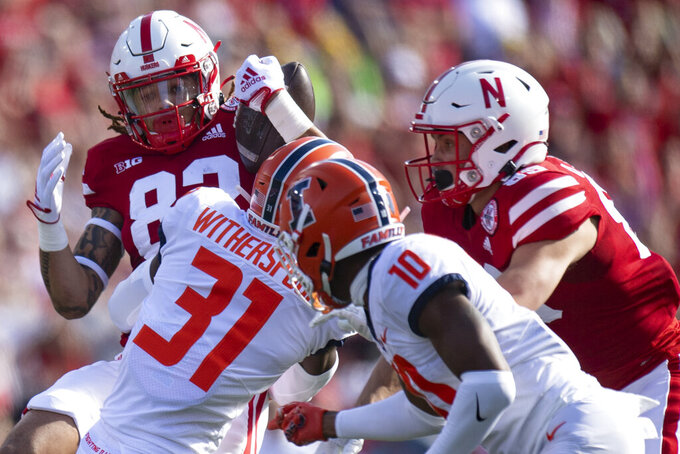 Nebraska's tight end Chancellor Brewington (82) is tackled by Illinois' defensive back Devon Witherspoon (31) in the first quarter during a football game between Illinois and Nebraska, Saturday, Oct. 29, 2022 at Memorial Stadium in Lincoln, Neb.(Noah Riffe/Lincoln Journal Star via AP)

Control of the Big Ten West is on the line with the Boilermakers trailing the Illini by one with three games to go for each team. While Illinois faces a tough road trip at No. 3 Michigan next week before wrapping up against last-place Northwestern, Purdue hosts the Wildcats next week before closing at struggling rival Indiana. If the Illini win at home on Saturday, they can afford to lose one of their remaining two games and would still hold the tiebreaker if Purdue closes with a pair of victories.

Purdue receiver Charlie Jones vs. Illinois cornerback Devon Witherspoon. The showdown between these two will go a long way in determining whether Purdue can replicate a degree of offensive success that helped Michigan State escape Champaign with a surprising 23-15 win last week. Jones leads the Big Ten in receptions per game (9.2), receiving yards per game (104.9) and receiving yards (944). Witherspoon is the fourth defensive back in Illinois history to be named a Thorpe Award semifinalist, earning the recognition with 13 forced incompletions and holding opponents to a 29.8% reception percentage.

Purdue: Devin Mockobee. To beat the Illini, Mockobee will almost certainly need to be effective. The redshirt freshman is averaging 5.35 yards per carry to edge out his counterpart Chase Brown, but Illinois' No. 4 rushing defense is allowing just 79.7 rushing yards per game. If he makes the right reads, protects the ball and gets a good push from the offensive line, Mockobee can tilt this game toward the Boilermakers.

Illinois: Brown. Conversely, few players have made as substantial of an impact on their team as Brown has for the Illini. Brown has rushed for more than 100 yards in 10-straight games and leads the country in all-purpose yards (1,485) despite not handling kickoff or punt returns. Purdue has a capable rushing defense which ranks 25th nationally and allows 118.2 yards per game.

Both teams are chasing their first Big Ten West titles since the conference introduced divisions in 2011. ... Purdue leads the Big Ten in passing offense with an average of 298.0 yards per game. ... The Illini are the only team to have wins over two top-10 defenses (Iowa and Minnesota). ... Purdue has won five of its last seven Big Ten road games and 13 of 17 matchups against Illinois since 2003.