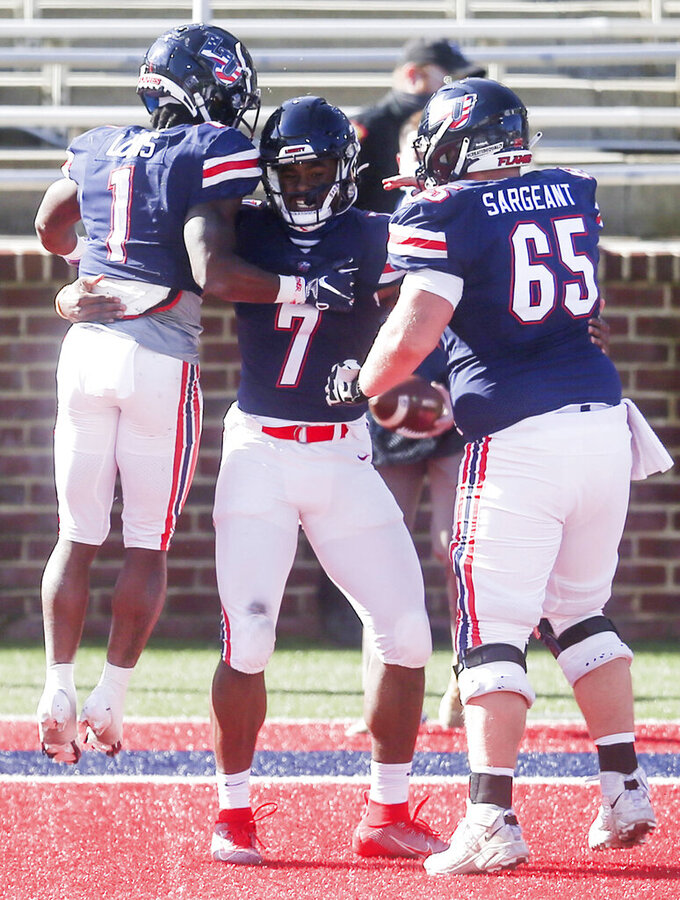 Liberty quarterback Malik Willis (7) celebrates his touchdown with his teammates during the first half of an NCAA football game on Saturday, Nov. 14, 2020, in Lynchburg, Va. (AP Photo/Shaban Athuman)

Liberty’s wins against Atlantic Coast Conference opponents have been a highlight of its unbeaten start. Now the 21st-ranked Flames have a chance to claim another with Saturday night’s visit to North Carolina State.

The Flames (8-0) have the best start in program history, which includes wins at Syracuse and Virginia Tech. Before this year, the football independent had lost all eight meetings with ACC opponents.

“The one thing I do not concern myself with or really worry will be our confidence going into Saturday,” Liberty coach Hugh Freeze said. “I think we breed confidence into our players and I think their experiences thus far give them reasons to believe that we will go in and compete.”

The Flames have done more than that so far. Auburn transfer Malik Willis has thrived at quarterback, while Liberty ranks 12th in the Bowl Subdivision ranks by averaging 254.5 yards rushing per game – including big performances in the Syracuse and Virginia Tech wins.

N.C. State (5-3) is coming off a win against Florida State after losses to rival North Carolina and No. 12 Miami. The Wolfpack’s offense has picked up its production under first-year coordinator Tim Beck, scoring 41 against the Hurricanes and 38 against FSU for its best output in consecutive games all season.

“When I was at Northern Illinois (the players) weren’t afraid of anybody,” Wolfpack coach Dave Doeren said. “They were just excited to play the game, and I’m sure that’s what we’re going to get. … It’s going to be a very confident group and it’s going to be a group that wants to prove themselves and an opportunity for them to do it on a bigger stage.

“For us, we have to acknowledge all those things that I just said. But at the end of the day, it’s really going to be about how we play.”

Some things to know about Saturday’s Liberty-N.C. State game:

Willis has been responsible for 16 touchdowns in the past three games, with 12 of those coming through the air. He has also completed 72.5% of his passes in those games while also averaging 100.7 yards rushing.

On the season, Willis has thrown for 15 touchdowns and one interception while running for a team-high 700 yards.

“Each day, I’m just trying to get a little better,” Willis said.

The Wolfpack would love to another big game from Thayer Thomas as a reliable target for quarterback Bailey Hockman.

The receiver had career highs of 11 catches for 135 yards to go with two touchdowns in the FSU win. That came after a four-game quiet stretch that included a total of eight catches for 112 yards, including a single 9-yard grab in a shootout loss to No. 12 Miami.

“I’m not the type of person to go up to a quarterback and say ‘I need more targets’ and stuff like that, because in the heat of the moment and the flow of the game, it’s really not about me,” Thomas said.

A win Saturday will make the Flames 4-0 on the road for the first time since 1997. Before this season, Liberty was 3-9 on the road since playing its first FBS season in 2018.

The Wolfpack could get a boost with the expected return of junior safety Tanner Ingle, a team captain who has been hampered by a preseason hamstring injury. Ingle last played Oct. 17 against Duke and has missed three straight games.

Freeze and Doeren have competed on the golf course, but are facing one another for the first time as head coaches, though they nearly matched up in the GoDaddy.com Bowl to close the 2011 season.

Freeze was hired by Mississippi and did not coach the game for Arkansas State, which lost to Doeren’s Northern Illinois team 38-20.