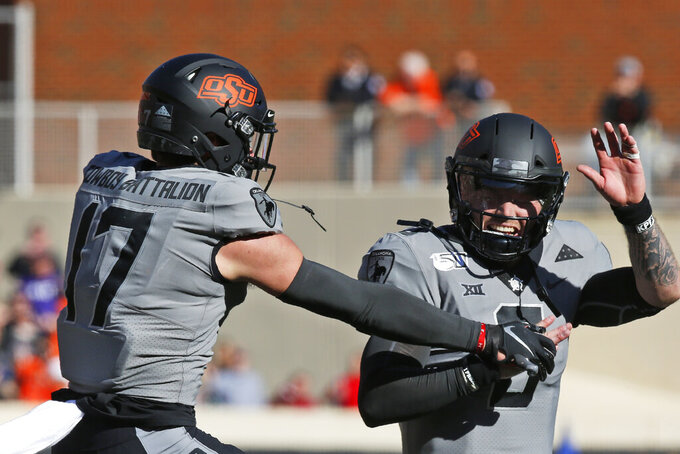 Dillon Stoner has stepped up at receiver since Tylan Wallace’s ACL injury a month ago. Backup quarterback Dru Brown performed well in place of Spencer Sanders in his first extended action last Saturday as Oklahoma State (8-3, 5-3 Big 12) defeated West Virginia, 20-13, for its fourth straight victory. Sanders is out with a thumb injury.

“Obviously, you lose a lot of offense when you lose Wallace and then with Spencer being out, we lose some explosiveness, but the other guys have made some plays and Dru played really well,” coach Mike Gundy said. “He was effective, he was very efficient, he took care of the football. He does process information quickly, which is important. He manages the game.”

Both play off the skills of the nation’s leading rusher, Chuba Hubbard. Oklahoma coach Lincoln Riley is still plenty concerned as his eighth-ranked Sooners (10-1, 7-1, No. 9 CFP) head into their rivalry game with the 21st-ranked Cowboys on Saturday.

“They’ve continued to do a good job making big plays,” Riley said. “The quarterback’s very capable, and there’s still a lot of talent out there skill-wise.”

Brown, a graduate transfer who previously played at Hawaii, completed 22 of 29 passes for 196 yards and two touchdowns, with no interceptions to earn Big 12 Newcomer of the Week honors.

Gundy pointed to Brown’s maturity and experience, having started 22 games in 2016-17, as key to his success.

“He’s played a lot of games in his career,” Gundy said. “He has a good demeanor, he’s been around a lot, he’s practiced a lot.”

Brown has maintained a supportive, team-first attitude despite sitting on the sideline as a backup, last season to Taylor Cornelius and then this year to Sanders. He played one snap last season, and only came in during mop-up time this year before Sanders injured his hand in a 31-13 win over Kansas on Nov. 16.

Despite the limited action, he’s won the team over.

“He’s been voted a captain and not even stepped on the field for the most part,” Gundy said. “It’s not easy to do. We all know the time we’re in with the transfer portal and all that, that’s a part of college football now that’s not going away. Dru’s been very good from that standpoint.”

As for Stoner, he had a season-high eight receptions for 62 yards and a touchdown against West Virginia following a career-high 150 yards and two touchdowns on five catches against Kansas.

Replacing Wallace seemed daunting: He ranked among the nation’s best with 53 receptions for 903 yards and eight TDs in eight games. In the three games since Wallace underwent surgery, Stoner has 16 catches for 305 yards and five scores.

“He’s been awesome,” Gundy said of Stoner. “When Wallace went down, he (Stoner) has to play multiple positions, and he’s made plays. He just works hard every day. He dives for balls in Thursday practices. Nobody does that. That’s why he’s had success.”

With defenses loading up to stop him on the ground, , passing to him changes the dynamic and still gets the ball in his hands. After recording just 11 receptions combined over the first 10 games this season, Hubbard had seven catches for a team-high 88 yards against West Virginia. Though his 106 yards rushing was his second-lowest total of the season, he still produced 194 yards of offense overall.

“They should have been throwing to him earlier in the year, so finally they’re throwing to him,” Gundy said. “He catches the ball most of the time on the line (of scrimmage) or behind the line, so basically you’re throwing him a running play. He gets out in space and he gets to run. If he’s running in space, it’s a good football play.”