No. 21 Tulane, SMU clash with AAC title hopes in the balance 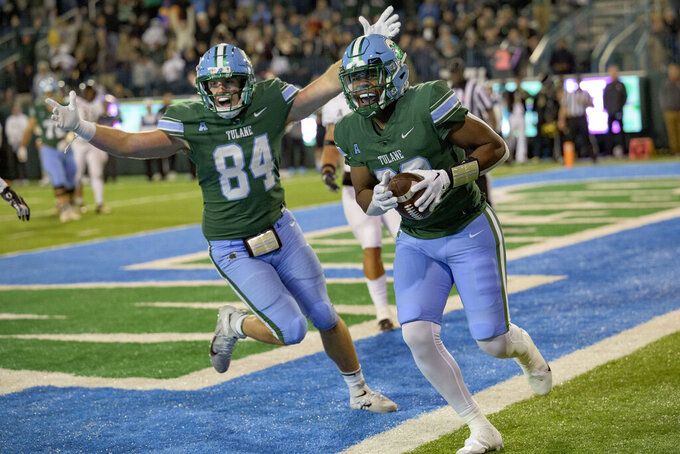 NEW ORLEANS (AP) — Coming off a home loss to Central Florida, linebacker Nick Anderson and his Tulane teammates have plenty of incentive to get back on track against SMU on Thursday.

The 21st-ranked Green Wave can move one step closer to its first appearance in the American Athletic Conference championship game by winning on Senior Night while ending years of frustration against the Mustangs in the process.

“We’ve been working hard this season and want to go out on a good note for the home fans,” said Anderson, who is second on the team with 76 tackles. “We haven’t beaten SMU since I‘ve been here. We lost to them in overtime the last time they were here, so there’s definitely high emotions for this game.”

Anderson references the 2020 overtime loss, when Tulane came very close to ending a mammoth losing streak against ranked opponents that has since stretched to 61, but there have been several other excruciating defeats.

Needing a win in the 2017 finale to secure its second bowl bid in 15 years, Tulane lost 41-38 when quarterback Jonathan Banks was ruled down inches short of the goal line as time ran out.

The Wave led 23-14 three minutes into the fourth quarter in 2018 and was still up 23-21 when it started a drive with 1:53 left. After forcing a punt, the Mustangs scored the winning touchdown on a 67-yard pass.

This version of SMU will present another stiff challenge in a matchup of the American’s highest scoring offense versus its No. 1 defense. The Mustangs average 40.3 points. Tulane yields only 19.0.

SMU quarterback Tanner Mordecai averages a league-best 308.9 passing yards and threw for nine touchdowns in a wild 77-63 win at Houston on Nov. 5. Rashee Rice has a FBS-high 1,167 receiving yards on 77 catches.

Tulane allows an American-low 175.5 passing yards. Seth Henigan of Memphis is the only quarterback who threw for 300 or more yards against the Green Wave, and 257 of his 312 came after the Tigers trailed 35-0 at halftime.

“The best thing they do is they don’t give up explosive plays,” SMU coach Rhett Lashlee said. “They are good against the run and great against the pass. They force you to beat them. They are not going to blow a coverage and turn a guy loose."

Tulane — tied for first in the American with UCF and Cincinnati — can clinch a spot in the league’s championship game by beating SMU and winning at Cincinnati on Nov. 25. The Mustangs are technically still alive but will be eliminated with a loss and will need everything to break right even if they beat the Green Wave and Memphis.

Tulane was uncharacteristically sloppy in its 38-31 loss to UCF last week, racking up season highs for penalties (eight) and penalty yards (83).