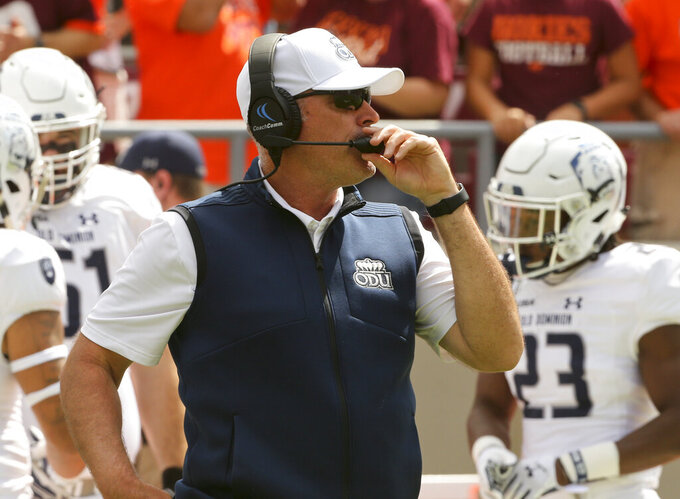 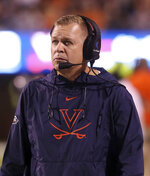 CHARLOTTESVILLE, Va. (AP) — Old Dominion coach Bobby Wilder was looking forward to catching Virginia in a more vulnerable state when the Monarchs added the Cavaliers to their schedule.

"I was really hoping when we scheduled this game three years ago that they wouldn't be this good if I'm being 100% truthful," Wilder said earlier this week about ODU's game Saturday night at No. 21 Virginia. "But I've been upstairs all morning studying them. They are a really good football team."

The Monarchs face an uphill battle to make headlines with an upset of the Cavaliers.

Virginia (3-0) is looking for its best start since 2004 when the Cavaliers won their first five games of the season. The Monarchs (1-1), in just their 11st season since reinstituting the football program, are coming of a 31-17 loss at Virginia Tech two weeks ago.

An early bye may have allowed ODU to prepare a few surprises for Virginia, but Wilder isn't sure.

"I think they are a complete football team," Wilder said, "and what I mean by that is they are solid in all aspects."

The Cavaliers are coming off a 31-24 victory against Florida State in a game they trailed for much of the contest. But Virginia fans were out in force for the matchup. The crowd — 57,826 — was the largest for the Cavaliers at home since Notre Dame visited to start the 2015 season.

"I was thrilled with the attendance and the support we received in our stadium," coach Bronco Mendenhall said. "Clearly made a difference for our team."

Here are some other things to watch when Old Dominion visits Virginia:

Monarchs quarterback Stone Smartt kept Old Dominion in the game against Virginia Tech, running for 48 yards on 16 carries and completing 16 of 30 passes for 122 yards. His ability to pull the ball down and gain crucial yardage will be critical for the visitors to sustain drives against a very, effective defense.

Mendenhall has said he never tries to limit quarterback Bryce Perkins' decision-making, though the Cavaliers hope he isn't on the run much against ODU. Wayne Taulapapa ran for three scores against the Seminoles and if Virginia can establish its ground attack, it could limit Perkins' exposure in the open field.

Old Dominion has only 12 starters back from a team that had two players selected in the NFL draft and still finished just 4-8. Virginia, conversely, has 63 freshmen and redshirt freshmen on its roster, third-most among Football Bowl Subdivision teams and the most among teams that played in bowl games last season.

Perkins has thrown two interceptions in each of his last two games after throwing just nine all of last season. In a game against a team that appears overmatched on paper, Virginia is looking to limit mistakes that could fuel an Monarchs' upset.

The Cavaliers' game next week against Notre Dame would be a distraction for the Cavaliers, especially playing what appears to be an overmatched non-Power Five team at home. But Virginia is aware it would not be wise to overlook Old Dominion. The Monarchs beat then-No. 13 Virginia Tech 49-35 last season.