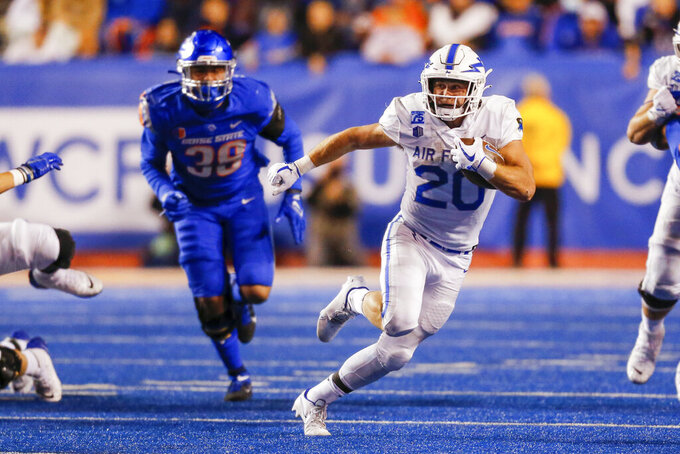 “Lucas finished the other night on a high note," Aztecs coach Brady Hoke said. “He has the hot hand right now.”

The Aztecs are 6-0 (2-0 Mountain West) for just the second time in 46 years despite a largely unproductive passing offense.

Johnson relieved an ineffective and banged-up Jordon Brookshire in the fourth quarter last week and delivered TD passes to junior Jesse Matthews in both overtime periods for his only completions of the game as the Aztecs brushed off a rough regulation to beat San Jose State 19-13.

“Honestly it was a bit of a surprise,” Matthews said of the second TD. “I knew we were trying to set up the field goal, but I saw the same coverage he did. It was 1-on-1 with the corner."

“Your reaction is you've got a lot of faith and you believe in those two,” Hoke said. “Lucas had gone to Jesse before — same play, same check — and I felt pretty good about it. Obviously if it didn't work out I wouldn't feel as good.”

It's that veteran chemistry the Aztecs are counting on to help them beat a Falcons team that is a slight favorite even though they've lost eight straight in the series.

“We have an elite football team we're going to play this weekend,” Hoke said. “They should be 7-0. Air Force is very dominant at the line of scrimmage. They take care of the football. They average 37:26 in time of possession, which is unheard of. This is definitely our biggest challenge of the year.”

Other subplots Saturday as the Falcons seek their first win over a ranked team since 2016:

“They’re always going to be good rushing the football, with time of possession," Hoke said. “But they are 11th in the country defensively and it just tells you how good of a total football team Air Force is."

The Falcons are off to their best start under 15-year head coach Troy Calhoun, who’s trying, as usual, to keep things in perspective.

“We need to enjoy this one, but we need to get better and have some things we need to fix,” he said. “We made a good number of mistakes, but we hung in there and persevered.”

The Aztecs are counting on Johnson sparking their stagnant passing game. San Diego State ranks 125th out of 130 FBS teams with a paltry 129.2 air yards per game. They're also 121st in completion percentage (52.2).

That won't be easy against Air Force.

“We know they always play us tough,” Matthews said. “Those are just a tough group of guys. We know what they do outside of school and football, and the dedication it takes to go to Air Force and serve our country. We know they’re going to be a tough group."

Hoke said it's imperative the Aztecs start out fast because the Falcons are outscoring their opponents 59-14 in the first quarter.

“It’s really important, there is no doubt about it,” Hoke said. “I think they start so fast because you can’t simulate that (triple option) offense. It’s awfully hard and we’ve worked at it in the spring a little bit, a little bit during fall camp and working hard at it right now.”

The Falcons are one of the best teams in the nation on fourth down, converting 17 of 21.

“If we need to hold them to four-and-outs, we’ll be glad to take on the challenge,” said Aztecs senior linebacker Caden McDonald. "That’s what our defense prides itself on is getting the punt return team on the field and getting the offense the ball back. So if four-and-outs is the way we have to do it then we’ll do it.”