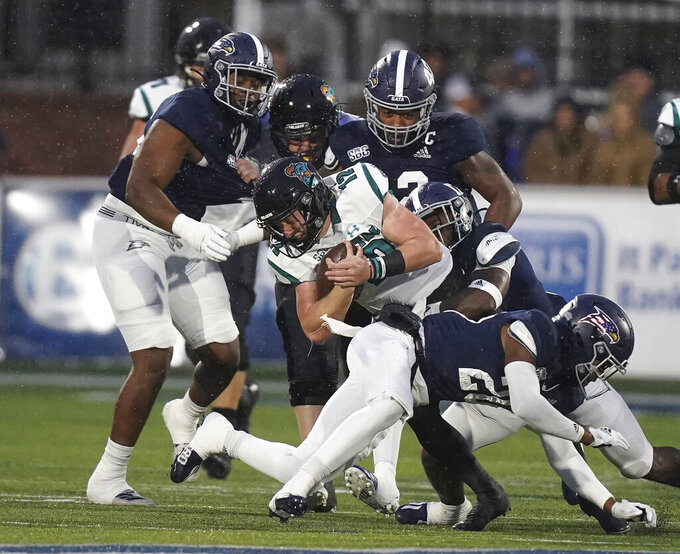 Line: Coastal Carolina by 10 1/2, according to FanDuel Sportsbook.

Coastal Carolina looks to stay in position for the Sun Belt's East Division title should Appalachian State slip up down the stretch. The Chanticleers lost to the Mountaineers last month and need an App State loss to play for a league title.

Coastal Carolina QB Bryce Carpenter vs. Georgia State's passing defense. Carpenter makes his second straight start in place of injured Grayson McCall. Carpenter will go against the Panthers defense that is giving up 257 yards a game through the air, 103rd overall nationally.

Coastal Carolina: WR Jaivon Heiligh looks to increase his school record of 10 games with 100 or more receiving yards. He leads the Chanticleers with 40 catches and 792 yards this season.

Carpenter, a senior, is starting his 10th game for Coastal Carolina. He started two games in 2018 and the final six games 2019 before filling in for an injured McCall last week. ... The Chanticleers have won their past 12 home games. Beating Georgia State would tie the school record set from 2012-14 in the FCS. ... Georgia State is playing its second straight ranked opponent, and fourth this season, after a 21-17 loss to No. 24 Louisiana-Lafayette last week. The Panthers also lost to then-No. 22 North Carolina and then-No. 23 Auburn. ... Coastal Carolina has scored 27 or more points in its nine games this season. ... Georgia State has 18 players from South Carolina on its roster. Head coach Shawn Elliott was the South Carolina offensive line coach under Steve Spurrier and took over as interim head coach when Spurrier resigned in 2015.