No. 22 Fresno St. savors return to poll before facing UNLV 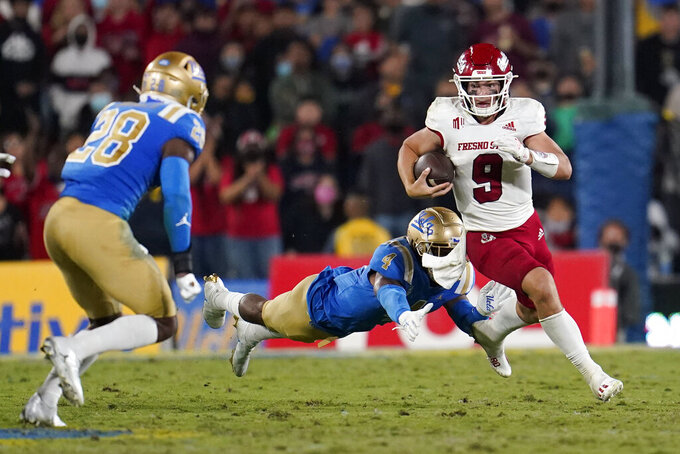 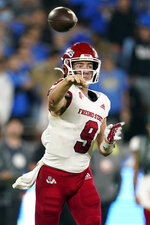 The start to this season was exactly what Kalen DeBoer had in mind for Fresno State when he took over as coach for the Bulldogs before the 2020 season.

With an exciting big-play quarterback in Jake Haener and a solid roster surrounding him, Fresno State has made it back into the AP poll after pulling off an upset at then-No. 13 UCLA last week.

The 22nd-ranked Bulldogs (3-1, 0-0 Mountain West) are off to an impressive start and made it into the poll for the first time since 2018.

DeBoer wanted his players to savor the accomplishment that came after the 40-37 win at the Rose Bowl for a bit before turning the focus to taking on UNLV (0-3, 0-0) on Friday night.

“Not celebrating it, for a little bit anyway, to me would be a shame just because the guys work too hard not to embrace it,” DeBoer said this week. “Embrace it and then you can now really focus on what’s important and that’s moving forward and moving on to the next.”

It's been an odd season so far for the Bulldogs, who have had lopsided home wins against overmatched Connecticut and Cal Poly mixed in with a tight road loss at Oregon and the win against the Bruins.

Now they face the winless Rebels.

“We’ve had kind of the extremes as far as teams and the talent we face,” DeBoer said. “In some ways you don’t quite know exactly what you got. ... I’m super proud of the guys and us handling success. We’ve done a pretty good job with that through the first few weeks and you know we got to continue to do the good job after beating UCLA.”

The Rebels are still seeking their first win under coach Marcus Arroyo, who has lost all nine games since taking over before the 2020 season.

UNLV is facing a ranked team for a third straight week for the first time in school history, having lost to then-No. 23 Arizona State and then-No. 14 Iowa State. Now they try to break through against the surging Bulldogs.

Fresno State quarterback Jake Haener got plenty of accolades for overcoming a crushing hit to his right hip to lead the Bulldogs to the comeback win at UCLA. Haener threw for 455 yards, including the go-ahead touchdown pass to Jalen Cropper with 14 seconds remaining. He was also wincing in pain on the ground after taking numerous hits throughout the night.

“We know and his teammates believe in the toughness he has,” DeBoer said. “I think just thriving in the moment, it goes along with that. The mentally tough and the physically tough part.”

The Rebels have used a different starting QB every game this season, with Justin Rogers starting the opener, Doug Brumfield the second game and Cameron Friel last week. Tate Martell even got into the mix last week as UNLV has played four QBs in the past six quarters. Brumfield is expected to be back this week after missing a game with an injury and is the only one of those four QBs to lead a TD drive the past two weeks. The other three QBs produced only three points in that span.

DeBoer was an assistant at Fresno State in 2017 when the Bulldogs followed up a big win with a loss to UNLV. Fresno State won 27-3 at San Diego State that season before heading home and losing to the Rebels 26-16.

The losses to Arizona State and Iowa State extended UNLV's winless streak against ranked teams to 24 straight games. The last win came on Sept. 13, 2008, when the Rebels beat No. 15 Arizona State 23-20 in OT.