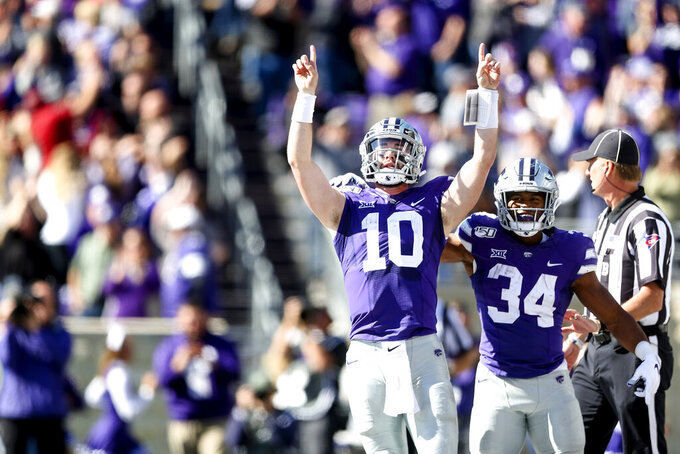 MANHATTAN, Kan. (AP) — Sitting in a far corner of the football stadium's parking lot was an old school bus, painted in Kansas State colors and with the words "Win the Dang Day" scrolled across the side.

It's the catchphrase that Chris Klieman brought to the Wildcats when he was hired to replace the retired Hall of Fame coach Bill Snyder late last year. Klieman was a lukewarm selection for many fans, despite his championship-winning pedigree at North Dakota State, because he had no ties to the program and little experience working at college football's highest level.

But after a resounding victory over then-No. 5 Oklahoma on Saturday, which pushed the Wildcats back into the AP Top 25 , good luck finding any critics of the new coach in the Flint Hills.

Win the dang day? The Wildcats sure did this weekend.

"I don't know if it has really fully hit me yet," said quarterback Skylar Thompson, who threw for 213 yards while running for four scores in the 48-41 victory. "It's a special moment for me in my life, but I know for Kansas State and the history, it'll go down as a game people will remember forever."

The No. 22 Wildcats (5-2, 2-2 Big 12) have won big games before, topping Nebraska in a massive showdown in 2000 and upsetting Texas in 2006. But the ranking sitting beside the Sooners' name is only part of what made Kansas State's victory so memorable.

The biggest part was the coach standing on the sideline.

With a blue-collar, everyman persona that resonates with the school's largely ag and tech fanbase, Klieman has slowly brought even the most reluctant fans onto his side. He spent hours before the season traveling to all corners of the state, even stopping by Kansas Speedway for a NASCAR race, and embraced not only the challenge of replacing Snyder but of building upon his foundation.

Eventually, fans began to accept him as more than just the lower-division coach whom Kansas State athletic director Gene Taylor chose because of their friendship. Or what some viewed as Taylor's backup choice when other, higher-profile possibilities chose job openings elsewhere.

Evidence of that buy-in could be seen in the parking lot of Bill Snyder Family Stadium, where that school bus with "Win the Dang Day" on it sat in the far corner as fans celebrated all around.

"It's a great program win," Klieman said, "but I'm most happy for the players. They earned it."

Indeed, the fans aren't the only ones to buy into Klieman's messages of hard work, perseverance and family. There were a handful of transfers when he was first hired, but the veterans that stuck around and the transfers and freshmen that arrived have poured themselves into his vision.

In an era of wide-open offenses, the Wildcats bludgeon their opponents — they ran for 213 yards against the Sooners. They are fundamentally sound, hit hard on defense and are among the least-penalized teams in the conference, traits that allow them to overcome any difference in sheer athleticism.

Again, a blue-collar attitude that resonates in the college town of Manhattan.

"I had a healthy respect for Kansas State," Sooners coach Lincoln Riley said. "I mean, you watch how they play and they've gotten better each week. We know what the environment is like coming in here, so you know if they make some plays there's going to be some momentum in that stadium.

The game wasn't decided until a video review showed that an Oklahoma player had touched an onside kick that the Sooners recovered a single yard too early. But it took them making a frantic fourth-quarter charge just to get that close — at one point, the Wildcats had them in a 41-23 second-half hole.

Now, the Wildcats have a chance to make some noise in the league race.

They lost their first two games, to Oklahoma State and Baylor, leaving them with an uphill climb just to reach bowl eligibility. But they've bounced back by beating TCU and Oklahoma, still have games left against the three worst teams in the Big 12 standings in Texas Tech, Kansas and West Virginia, and have a couple of statement possibilities with Iowa State and Texas still on deck.

"I mean, truly it was a game that we needed to get the confidence going against a good football team," Thompson said. "It kind of shows what we are capable of."