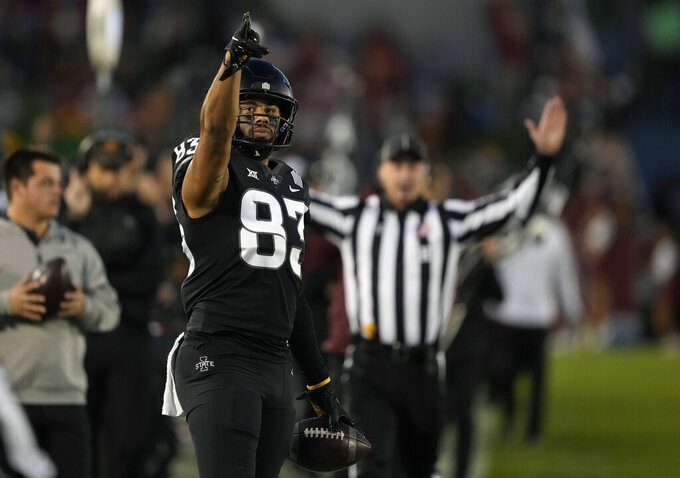 Iowa State tight end DeShawn Hanika (83) signals a first down during the first half of an NCAA college football game against Kansas State, Saturday, Oct. 8, 2022, in Ames, Iowa. (Matthew Putney)

Line: Texas by 16 1/2, according to FanDuel Sportsbook.

With four straight games against AP Top 25 opponents on deck, the Longhorns can't afford to drop this game against the struggling Cyclones. Texas has bounced back from a loss at Texas Tech to win two in a row and should have plenty of confidence after hammering Oklahoma 49-0 last week. Iowa State has lost three straight games by a total of 11 points. The Cyclones haven't lost four in a row since 2016, coach Matt Campbell's first season.

Iowa State defensive line vs. Texas offensive line. DE Will McDonald IV had two of the Cyclones' three sacks against Kansas State last week and needs only two to set the Big 12 career record. The Cyclones are among the top run-stopping teams in the nation at 91 yards per game. The Longhorns' starting offensive linemen have given up a combined four sacks and paved the way for Bijan Robinson to average better than 5 yards per carry and 100 yards per game.

Iowa State: QB Hunter Dekkers has thrown for just three touchdowns and been intercepted three times in three Big 12 games, and only four passes have gone for more than 20 yards in his two road games. He'll need to raise his game against the conference's No. 2 pass defense.

Texas: TE Ja'Tavion Sanders has caught 15 passes for 189 yards in three Big 12 games and he has four touchdowns in the last two. That nearly matches the production of the Longhorns' top receiver, Xavier Worthy.