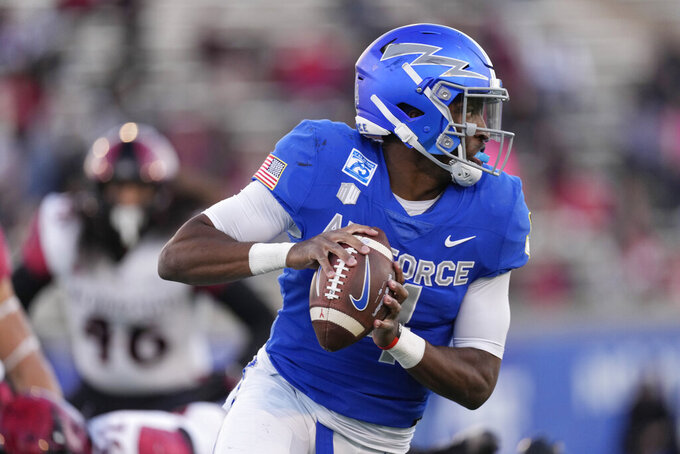 The Aztecs kept Air Force’s top-ranked running attack in check by frequently using a fourth linebacker instead of a defensive back.

“Everybody knows what they do,” Aztecs linebacker Michael Shawfroft said. “They run the ball really well. They’re a really tough team to play. It was just something that we game-planned really well this week. Our coaches made it simple for us and just let us play our game. It was just see ball, get ball.”

“Instead of having another DB in there, we really felt our linebackers — and that’s a really good group, they’re well-coached — it put some bigger bodies out there on the field that are really athletic also,” San Diego State coach Brady Hoke said.

The Aztecs led 13-0 at half, with Williams’ 1-yard TD run between Araiza’s field goals of 22 and 51 yards following Air Force turnovers.

“We had too many mistakes on our part,” Air Force defensive lineman Jordan Jackson said. “They’re a great team and we couldn’t afford to make mistakes like we did. I think that was the deciding factor.”

San Diego State added to the lead on its first possession of the second half. Bell broke a 32-yard run before scoring from 3 yards out to make it 20-0.

“If you go out there and fight every play, eventually something’s going to happen, some big play is going to come, something is going to work out and that’s exactly what we trust in,” Bell said.

The Falcons got on the board late in the third quarter on Warren Bryan’s 13-yard pass to Dalton King on fourth down. Initially ruled incomplete, the call was overturned on review when it was determined King had possession when he crossed the goal line before the ball came out on the hit by Patrick McMorris.

Air Force pulled to within six after Dane Kinamon took a fourth-down pitch from Bryan and ran 3 yards for a touchdown with 3:59 left.

The Falcons got the ball back with 2:18 to play and punted after a fourth-down conversion was negated by a penalty. San Diego State ran out the final 1:35.

San Diego State’s top-ranked rushing defense bottled up Air Force’s ground game most of the game. The Aztecs held the Falcons to 192 rushing yards, well under Air Force’s average of 336.4 per game.

Air Force dropped to 4-19 against Top 25 opponents under coach Troy Calhoun. The Falcons’ last win over a ranked team was in 2016.

The Aztecs stand out as the lone unbeaten team in the Mountain West and figure to improve their ranking.

Air Force: The Commander-in-Chief’s Trophy will be on the line when Army plays the Falcons on Nov. 6 at Globe Life Field in Arlington, Texas.